I once had a fabulous idea for a novel.

I’d just finished my first creative writing course and following an encouraging discussion with a couple of participants I realised I had the makings of a brilliant missive about a part of my life.

The great novel, or perhaps memoir I guess, was to be about my time in Mozambique. I even had the first line all planned although it required little thinking as it featured prominently in most of the first letters I wrote at the time.

“What the fuck was I thinking?”

Of course (at the time) I was deep (deep) in some kind of culture shock. It was my first time overseas. I’d had little interest in travel. Even then, my interest was more in working in developing countries than actually seeing them. So, at 27 years of age I’d ventured off to Portugal to learn Portuguese for six or so weeks before flying into what-was-to-be-my-home-for-two-years.

My arrival in Mozambique’s capital, Maputo, was less than auspicious. I was booked into a hotel of sorts but my local boss-t0-be had decided that she could charge my non-government organisation massive amounts of money by having me live in their place while they lived in the small granny flat in the backyard.

She’d gone to A LOT of trouble.  In fact, according to my co-workers, she’d even bought a doona and sheet set from South Africa*. The problem was – of course – that my boss lived on the outskirts of town and I had no transport. Her husband would drive me around, she said.

I was freaked and didn’t know how to stave off the obligation – as members of her extended family moved about my house-to-be installing hot water and trying to make it expat-comfy.

The first letter I wrote from Mozambique (started on the plane from Lisbon to quell my nerves) was to my parents. It was handwritten of course and 21 pages long. The other letter, posted at the same time through written after my arrival, started with ‘WTF was I thinking?’ It was to a friend. At the time we were close. Now, merely Facebook friends. Life’s funny like that, isn’t it? 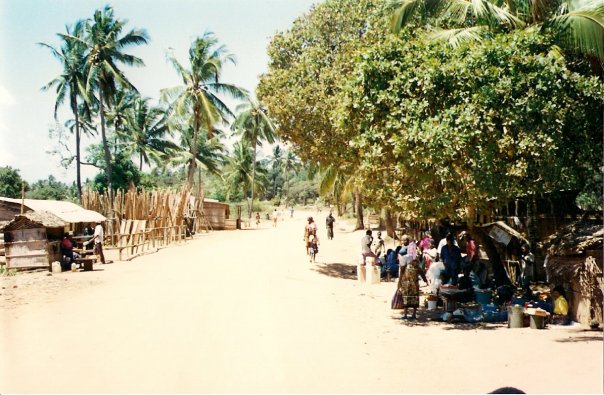 The novel-which-could-be-a-memoir seemed like a good idea. I would write the novel in present tense (as if back in 1995), in first person and interspersed with witty excerpts from letters sent home. It was gonna be a cake-walk as my mother saved EVERY letter and fax I wrote during my time there; and as a result I have folders and folders of surely-insightful and entertaining fodder.

However… my plan became unstuck for a few reasons:

1. I realised that (even with the letters to prompt me) my memories of 1995 were very murky indeed. I’d be in no-man’s land. It would be neither fact nor fiction. It’d be faction.

2. There really was no happy ending, fabulous revelation or story arc whatsoever: I went. I saw. I returned home. The end.

Have you planned to write a novel / memoir?
How’s your follow-through?

* Doonas were obviously a very non-Mozambican thing to have and my boss must have thought it was something I’d expect. Of course I didn’t learn about the ‘great doona purchase of 1995’ for some time – until my Portuguese improved, enabling me to converse with my co-workers. (The boss was the only one who spoke any English.)

PS. I escaped the boss’s house but that’s a whole other story.