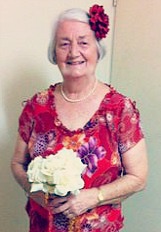 Don’t let that sweet innocent face fool you… this woman is a feisty one. Outwardly… a church-going, crossword-loving 70 year old. But – in reality – she’s a closet party animal.

Readers may recall I was due to go to a 21st birthday party on Saturday night. I called for ‘b’ costume ideas and the ones I most loved came in right at the end. There were many great suggestions but Anne came up with a couple of really innovative ideas.

I loved her ‘bucket list’ suggestion and thought about trying make a cylindrical object with a handle to wear around me with a list attached to the front. I went, however, with her suggestion of ‘blackmail’. The costume itself cost a mammoth $2.40 (two sheets of cardboard) but the cutting and pasting of the blackmail type letters for the address took friggin’ hours!

My dear mother – decided her ‘bee’ costume looked too ‘whoopy’ (her words) so went as a bridesmaid. We were on her home turf so she was driving. It was being held at a local bowls club and as her neighbour belongs to that club mum had gotten the low-down from her earlier.

We pulled up into a pretty empty car park. Early. Unsurprisingly. I mean, we’re old but what kind of card-carrying 21 year olds turn up to a 7pm party early or on time?!

However, we knew there’d be heaps of other rellies going and people of all ages so we did expect a few more there at the start time. We initiated delay tactics – ie. sat in the car and chatted for a bit.

Several minutes later a car pulled up and 4 or 5 costumed girls alighted. There was a bunny and some people in tutus. And very high heels. Another car arrived.

“Well come on, we might as well go in,” I suggested. 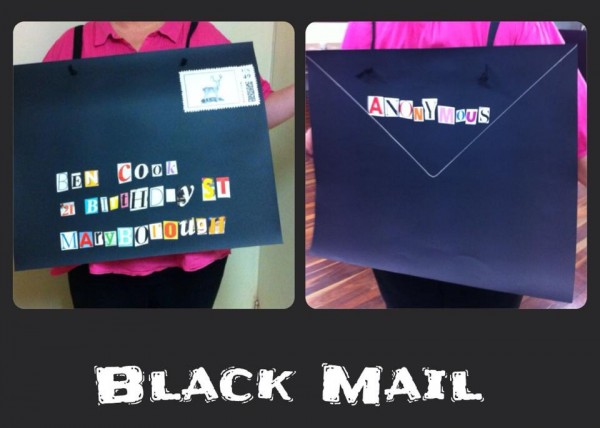 I donned my sign and mum gathered her ‘bouquet’. We walked inside to only a couple of handfuls of people. Given the lack of effusive welcomes we queued diligently to sign the 21st attendance book while looking politely at photographs. I couldn’t see any of family I knew, but shrugged that off.

We chatted politely to people also signing the book.

“I’m blackmail,” I explained to several sets of glazed-over eyes wondering if the costume was a bit too cerebral.

My mother left our card and money on the gift table and we ventured forth to get a drink (something alcoholic for me and soft drink for the non-drinker who’s supposedly my mother). Ever the faux-socialite I stopped at a table enroute.

“Oh hello,” I said and explained our costumes. The guy at the table was dressed as The Phantom.

“Are you rebelling against the b-theme?” I asked him. He didn’t seem to understand but chuckled politely. As one would do when confronted with a chatty but unintelligible 3 year old.

They weren’t particularly friendly so we moved on. I’d checked out the food coming out and we’d almost made it to the bar when a young woman sidled up to us. And whispered.

“I think you’re at the wrong party.”

My first thoughts – oh FFS, my costume’s not THAT obscure!

However…. apparently we were at someone ELSE’s ‘p’ themed costume party – another 21st – and our ‘b’ themed party was at a DIFFERENT bowls club several blocks away.

If we’d known anyone we would have been embarrassed we had to leave via the gift table to collect our card and money.

When we reached the car we couldn’t stop laughing.

I was relieved I don’t wear make up as tears were streaming down my face. The whole thing seemed improbable.

We decided we should have realised when our other rellies weren’t yet there, including my cousin and his wife (parents of the aforementioned 21 year old!).

And then… a realisation that made us laugh so much we mother told me to shut up or she’d need the loo….

the fact that some poor girl was going to have a registry attendance book thingy that says – Happy 21st birthday Ben! – in two places, signed by people she does not know!

Have you ever gatecrashed an event? On purpose or otherwise?
Any suggestions as to what we should have gotten up to at the first party before leaving?!