I remember when acronyms and basic emojis / emoticons first became a thing. I’d just joined an online dating site – sometime in the mid 2000s – and basically struck off any guy who dared insert an LOL into his profile. Urgh.

Interestingly I’ve never been an LOLer. I still don’t even know what many acronyms mean and have had to google NSFW and the like. I’ve mentioned before, however…. my fondness for WTF and it’s more-shocked big brother, WTAF.

I must also confess to using smiley faces, winking faces and the lopsided grin thing which helps ensure people know I’m being sarcastic – though given that’s usually the case they should just make that assumption.

On top of which however, it seems I’ve (more recently) also developed a penchant for the ‘thumbs up’ symbol.

As an aside, I should mention, I’m yet to use the poo emoji, though I bear it no grudges and am sure I will call on it at some point. 🙂 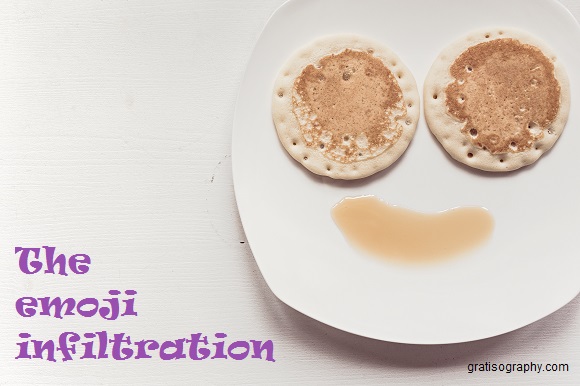 I’ve been pondering this lately as I’ve been thinking how much they’ve permeated our lives. Emojis. And this informal way of communicating.

In my workplace I’ll occasionally have ‘to and fro’ email conversations. And occasionally I’m tempted to add a smiley face. So the recipient knows I’m joking. Or being funny. (Though how they could not ever think I was hilarious is beyond me.)

The number of times I waste my energy typing back a ‘thanks’ or an ‘okay’ could easily be minimised if I could hit a ‘thumbs up’ button instead. So my receipt of their email / advice or whatever is acknowledged but no further comment is necessary. Indeed, friends with whom I DM a lot will attest to my love of the ‘thumbs up’ symbol.

But far more worrying is the fact I’ve started doing the thumbs-up thing in real life. Accidentally. Not often, but in certain situations. I was at the hairdressers a while ago when I noticed it the first time. It was noisy and when someone checked up on me I found myself giving them the thumbs up and being a little horrified with myself. Yet later – at the same appointment – when my hairdresser explained how long I’d have sh*t on my head (damn, I could have used the poo emoji then!) I responded with a thumbs up. Again.

It felt weird. I noticed I did it but it was also a reflex of sorts. And it’s continued. I was in a colleague’s office this week and we’d finished the conversation and she made some last minute comment or something… and I did a thumbs up in response.

So I wonder, is my (increasingly lazy) written world really permeating the rest of my life? And where will this stop?
How do you feel about emojis and acronyms? Are you a lover or hater?