Today’s recipe is a bit of a no-brainer. I mean, the next thing you know I’ll be sharing a recipe for boiled eggs. Well, I would if I’d ever boiled an egg. It can’t be that hard though. Everyone does it. Well, except me. Obviously.

Somewhere in my belongings I have all three series of these books which were particularly handy, although (in true – ‘me’ style) I just found a recipe or two I liked and then made them all of the time.

My SIL and brother however, as newlyweds, would sit down each fortnight and plan their menu – almost all of which came from the WW series. Their keenness was handy for me at the time cos I dined with them fairly regularly and got to work out what dishes I liked and might well try myself.

The recipe I’m sharing today is one I rarely made until a few years ago but it was always a favourite. It’s essentially diced chicken and pepperoni cooked in a tomato-based sauce and served with pasta or mash or similar.

Naturally as I can’t find the cookbook I don’t have the exact ingredient amounts but I suspect ANYONE who cooks with any regularity can guess at them. Plus… how boring would it be for me to do ALL of the heavy lifting for you.

Method (watch out, this is where it gets complicated – #not!)
Heat oil in frypan (or just spray if that’s your thing). Throw in your onion, garlic and herbs and cook until the onion softens. Add your diced chicken and when nearly cooked add the pepperoni and chopped tomato. Once cooked, stir in the tomato-based stuff of your choosing. The consistency is really up to you. I go overboard with the accompanying pasta, so need a bit more liquid. However normal people probably need less – just so it’s a thick mixture and not like a watery stew.

Simmer for a bit and then serve over pasta. 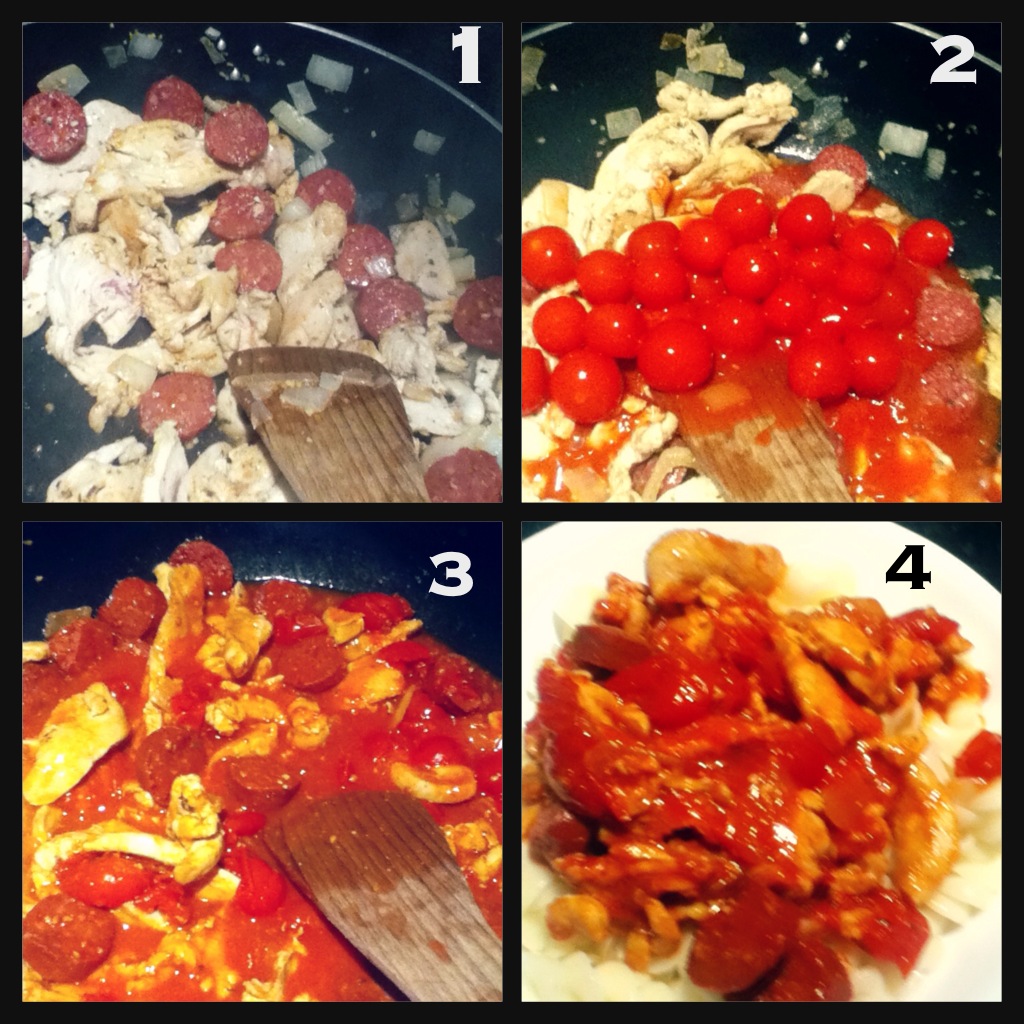 Unsurprisingly my most recent batch varied a little from the basic recipe. I used a tin of cherry tomatoes (cos they’re my fave) and my mother had given me some gluten-free chorizo, so I chopped that into slices and added it a bit earlier than I’d usually add the pepperoni (as it needed to be cooked). When I was more health conscious I actually bought the 40% less fat Hungarian Salami and used that instead of the pepperoni (even though it’s very thinly sliced). I’d just chop it into small bits and use more.

I generally serve mine (aka – eat it in front of the TV) with gluten-free pasta and have a fave brand which doesn’t go gluggy (though perhaps oil and salt in the boiling water really does help!). I also sprinkle some cheese (mozzarella is my cheese of choice) on top. Occasionally I’ll also dollop some sour cream on there, but it can dilute the taste a little… and you don’t want that!

And there you have it. It’s surprisingly yummy. The combination of meats is bizarrely delicious and it’s pretty bloody simple.

Does the notion of chicken and pepperoni combined appeal to you?
Do you hate me for being too lazy to find my recipe books and provide ACTUAL amounts?

Today I’m linking up with With Some Grace for Flog Yo Blog Friday!