And – other than the tale of the missing sunglasses (which I’ll mention later) and possible sunburn – it was a gorgeous days.

It occurs to me I remember my 50th birthday for the same reason last December, so perhaps I just need to bloody get out on boats / on the water more.

The small tour involved no more than a dozen. I was one of the last to be picked up so had a lie in (ie. was finishing the post I shared Wednesday) before getting collected by a minivan at 10am.

I knew one could get to Positano and Amalfi by bus or car but I’d been told to go by boat cos the roads are busy and perilous. And it was SO worth it.

I’d checked Trip Advisor and Capitano Ago’s Boat Tour came highly recommended. And it lived up to the hype.

Our pilot / driver / captain thingy was Luigi – who spoke quite a bit of English and had a sense of humour. I suspect he goes through the same palarvar with all guests…. “This is my second day.” And “Do you have Google maps on your phone?” But then happily steers the boat with a foot while he’s standing on the pilot’s / driver’s chair.

We were a group of 11 – obviously I was the single one amidst the couples and two mother-daughter combos.

The trip ‘there’ takes longer as Luigi stops to tell us about the towers (ie. the kind made of stone) along the coastline – built so locals could stay in contact and let other know when pirates were coming (I’m assuming this to be true). And he pointed out a few homes of the rich and famous – some regulars who own property (like Sophia Loren) and others who rent their own little rock / island thingys at exorbitant amounts of money.

The coastline is stunning and lived up to my expectations. The houses sitting precariously on the cliff sides were gorgeous and the water ridiculously clear and blue; light in some parts, dark in others.

Our first swim was near the aforementioned v.expensive rental island property. Several boats were stopped (moored?) there so I figured it’s a regular haunt.

People who know me know I DO NOT swim in the ocean and am pretty shark (etc) phobic, but we were told we didn’t need to worry about sharks or jellyfish. (And I didn’t think to ask why there are no sharks?!). The water was astoundingly blue and I couldn’t resist it so climbed off the platform at the back of the boat and it was one of the most delightful experiences I’ve had. The ocean was super salty and I did confirm with the others – more accustomed to swimming in the sea – and they all agreed it was saltier than most were used to.

The trip involved two stopovers – each for 2hrs – one in Amalfi and one in Positano. We did Amalfi first and I wandered about looking for somewhere for lunch, which (including my dining), inadvertently took almost all of the two hours.

The first place I tried was astonishing disinterested – which pissed me off cos I’d walked up a bloody big hill to get there. Instead I checked out GF options on Trip Advisor and ended up at the other end of the main beach strip and had a lovely lunch of chicken with potato. I thought I was ordering chicken skewers with cherry tomatoes and roasted potatoes with rosemary but I might have been mistaken about that. The chicken seemed to be coated in mozzarella or similar and the potatoes were to die for. Again I indulged in their gluten-free bread roll which was almost tasted like a wholemeal roll and ’twas yummy.

We’d all gone our separate ways and been given a time to meet back at the dock. There are so many boats coming and going skippers seem to only have a short period to get their passengers on and off.

Then it was off to Positano which was SERIOUSLY packed with tourists. I wandered around for a while before deciding to sit and have a cold drink.

I hadn’t planned for no shelter on the boat so felt more sunburnt than I would have liked and a bit paranoid about the amount of time I was spending in the sun (as I’m usually pretty careful).

Interestingly if I had a choice I’d probably head back to Amalfi for a stay. Positano didn’t grab me as I expected it to but then again I didn’t wander up the hills and do a lot of exploring. I didn’t swim in either place either though gazillions of people were traversing the pebbled beach to spend time in the clear beautiful water.

In retrospect I’d probably also do a bit more research about what I should have done in each town, though that’s not really my style so….

Luigi put to peddle to the metal (?!) on the way home and we flew across the waves. I was the one who asked about the second swim – which we’d talked about earlier, though by then it was almost 6pm and finally getting cooler.

When we stopped I was determined to jump off the side of the boat, rather than climbing off the back platform like a wuss. But as I prevaricated Luigi pushed me and I got dunked well and truly – which leads me to the saga of the missing sunglasses… which disappeared off my face as I went under water.

We resurrected my cap – which I ditched anyway – but my PRESCRIPTION LENS sunglasses were gone forever. 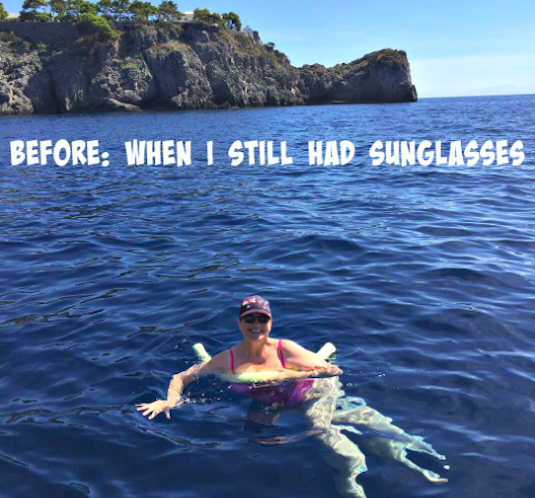 Thank fuck I brought a second pair with me (I only have two) which I thought was overkill at the time. I am seriously blind without them (like I can’t even walk around my own house without glasses) so I would have been doing a lot of day-time squinting for the next three weeks otherwise.

Sadly we ran out of prosecco on the trip home. We’d had our first cup after we’d barely left shore in Sorrento and all had at least three more. Those drinking beer kept going once we’d run out of prosecco and a few switched to white wine. I should mention there was also a mozzarella and tomato roll / sandwich on offer as well as limoncello just before the end.

Sunglasses aside, it was a wonderful day out. The scenery was just stunning. I HAD to stop myself from taking pictures as every corner we turned there was something Insta-worthy. It certainly lived up to my expectations in terms of its beauty, though was all probably a bit more touristy than expected.

I’d certainly recommend Capitano Ago’s tours as it all went smoothly and I was dropped at my hotel 8-9hrs after I was first picked up.

I know it’s only day two but I’m expecting the trip – the scenery, boat trip and the swim(s) to be a highlight.