In eight weeks from now I will be turning 50.

I know I know… you’re aghast. I look so youthful. And I behave like a young sprightly thing. Well, not physically, but still…

Thankfully I’m more zen than I expected about turning 50.

It wasn’t always the case. I felt there was so much I hadn’t done. Hadn’t accomplished. Time and life had passed me by.

And then in mid-late 2016 I met a group of women of a similar age and realised that I didn’t think of them as ‘old’. I thought of them as fabulous and realised they still had a heap of things they wanted to achieve – personally and professionally.

Sure, I do look at some people my age (or sometimes younger) and think they look bloody old and decrepit. And I feel that way myself quite often.

But in some ways my lack of partner and kids means my mindset is a bit like someone much younger. I still remember declaring (in my mid 30s) that I was finally ready to date. About 15yrs after everyone else my age.

So, perhaps I’m just a late bloomer. Or emotionally stunted. 😉

Anyhoo, all of that aside, it appears my milestone birthday is looming, and I’m sorry to say I’m doing poorly on my #5before50 bucket list.

Interestingly I’ve actually added my 5th goal to the list. At last. And I’ve kinda cheated cos it’s ‘doing something for my 50th’. 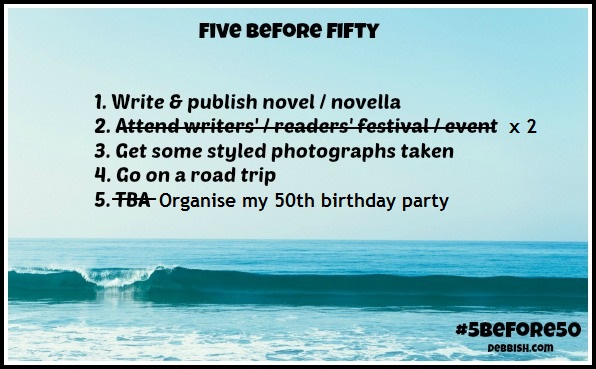 You might remember I was forced to start thinking about celebrations at the request of some friends back in June.

Well… I’m getting closer to a plan. I’ve tossed around A LOT of ideas – some of which I mention in that old post – as well as the limitations (friends vs families; expensive and busy time of year etc).

Initially (on securing a full-time job and no longer being as financially-challenged) I thought I might take a few friends away to some gorgeous house by the beach somewhere. And then I realised I already live in a quite-nice house by the beach. The cost of exclusive retreats and B & Bs (etc) is a bit prohibitive and I don’t want to ask my friends to pay their own way… though I know a couple of my closest friends have indicated they’re willing to do so.

Of course, my new plans to go to Italy next year mean that I have something MAJOR to look forward to in my future. But… I still want to mark this milestone somehow.

So my latest thinking involves a small local celebration. Perhaps stealing a friend’s idea of a champagne and sunset cruise for a smallish group of (ahem) friends. Although my biggest fear (of course) is that it’s a terrible time of year (not just because others have a myriad of commitments and are often away) but also because we’re more than likely to be bombarded with buckets of rain or – worse still – a cyclone.

I know however, I want to do SOMETHING. The Italy trip means it’ll probably be more low-key than originally planned, but I need to plan something cos that way at least I’ll have achieved TWO of my #5before50 birthday goals!

What do you think of the sunset cruise idea? Anyone know what the weather’s going to be like between Christmas and New Year? Oh… and are you at all surprised I’m failing in my #50before50 goals?