Late last week some lucky Aussie bloggers travelled to a gorgeous island in the north of my State and when they shared pics of their helicopter rides I was immediately jolted back to over a decade ago when I last rode in one.

I was a diplomat living in East Timor at the time – which may surprise many cos I feel like I am a surly antisocial bitch more often than not nowadays. But, it meant I was compelled to travel about the countryside to monitor stuff the Australian Government was funding (directly or indirectly – through UN agencies, non-government organisations, contractors and the like)*.

I have to admit – unlike some of my colleagues, I hated the travel. Many of the mountainous roads were quite treacherous; military planes less-than-comfortable and helicopters of dodgy Eastern European origin – some of which featured duct tape.

Anyhoo, the Whitsunday travails of my fellow (though vastly more famous and widely-read) bloggers reminded me of one of my most harrowing helicopter trips while in East Timor – which fortunately was also my last.

The occasion in question involved a group of us travelling across the country to attend the launch of… something (I cannot recall the detail now). In addition to the head UN honcho (aka, Special Representative of the Secretary General / SRSG) and his bodyguards the party included a couple of reps from the major donors – Australia and the US in this instance. 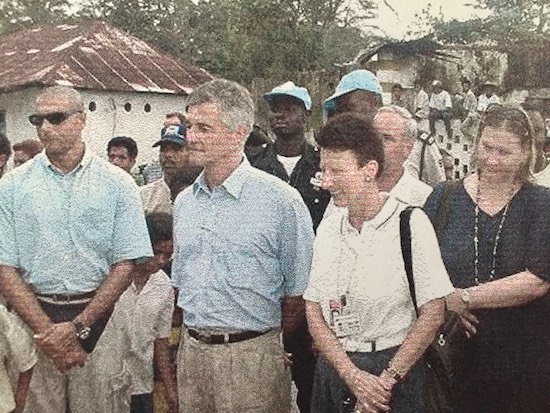 Me in the black looking sweaty and bedraggled.

In honour of the important travellers, two very-spiffy helicopters were waiting for us when we arrived to set off on the journey; and we divided ourselves accordingly (naturally I went with the party of underlings allowing the senior US and Australian Foreign Affairs reps to go with the SRSG).

I happily took my seat in the front of the small chopper and was immediately delighted at the glass/perspex front which allowed me to see trees and stuff under my feet as we zipped about. I was less-enthusiastic when the Portuguese pilot veered very quickly to avoid a sudden rise and nearly hit a tree… but, as it happens, that’s not the point of this torrid tale.

We arrived (wherever it was we went) and participated in the opening of the centre we were funding (I remember that much!). The v.charismatic SRSG gave his speeches along with the equally charismatic East Timorese leader Xanana Gusmao. We were welcomed warmly, met stacks of lovely East Timorese people and had a fabulous feast before it was time to leave. As the party had – at one point – split up, we had quite a wait for the recalcitrants to return to the waiting choppers and impatient pilots.

The problem you see, was that East Timor is very mountainous and visibility decreases from mid afternoon as the fog rises over the mountains. Any air travel needed to be meticulously planned to avoid later flights.

Once we eventually set off we were forced to fly low and follow gullies and flatter bits. Instead of flying straight across the country, the two choppers had to fly in a very indirect route.

I was in the back this time, but stuck in the middle so I could see everything the pilot was doing. Through my headphones, my poor Portuguese meant that I could make out SOME of the conversation between the pilots of the two choppers.

Suddenly a red light started to flicker on the dashboard (which incidentally may, or may not be called a dashboard on a helicopter!). On and off. With annoying regularity. My basic Portuguese allowed me to understand that this was – unfortunately – the fuel light.

I had a flashback to cheesy movies where the guy purposely runs out of fuel on a deserted road to make out with the unsuspecting girl in the passenger seat. That scenario (though a bit lecherous) is kinda cute. It occurred to me that running out of fuel while flying (IN THE AIR) in a helicopter was – in fact – far LESS cute.

Worse was yet to come, as eventually the fuel light stopped flashing and stayed on. I was promising deities (in which I possibly didn’t hold much credence) all sorts of weird and wonderful things (there is a reason I’m childless – remember Rumpelstiltskin?!). Because I’m a consummate professional however, I was tres calm on the outside. Plus as we had headphones on I couldn’t talk to the other three passengers.

And suddenly, as I was picturing my funeral (and thinking that being cryogenically frozen wasn’t going to be possible if my body was not intact!) an airfield came into view.

We arrived at a place called Baucau. We weren’t expected – obviously. I recall it being a problem because it was getting dark and there were no lights for flying at night… but… we huddled on the tarmac sharing tales of our near-miss while the pilots and other military types based at the UN airfield refuelled.

I still recall EVENTUALLY getting back to Dili (the country’s capital and my home for two years). It was late, but I was relieved to set foot on solid ground. Is it any wonder I now dislike travel?! 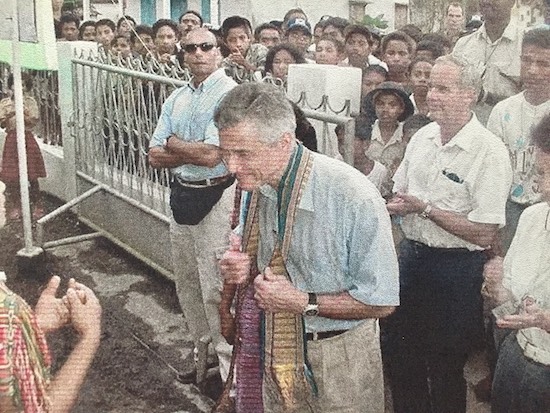 Sadly and only a bit related, the very charismatic SRSG from East Timor – Sergio Vieira de Mello, touted for big things in the UN family, was appointed to a similar position in Iraq in 2003. He and 21 others were killed not long after his arrival, when a suicide bomber drove a truck into the UN compound. I have no idea what his colleagues were like, but in the case of the man we nicknamed, The Serge… what a waste of an amazing talent.

Have you had any near misses in planes, trains or automobiles?
Am I alone in imagining the telemovie thing?

** Poor quality images as I used to send disks or emails of photographs home and my parents printed them. I’m sure I must have the original (disks) somewhere. **