I’m linking up again today with Kerri and her Monday #MyFirst. Today we’re writing about our first… moment of terror.

I’m not quite sure terror’s the right descriptor for this little tale (given decades later I huddled in my bed when bombs went off near my place in Phnom Penh), but it’s the first time I can remember being scared. I mean, I’m fairly sure coming out of the birth canal and receiving the oft-mentioned bottom-slap was quite shocking… but fortunately that experience is beyond the realms of my generally-pathetic memory.

My story takes place a few years later, when I was 3 or 4… when I was found by the police.

Shocking I know. I bet you’re envisioning kidnapping and other nefarious deeds, but no… this tale is a tad more embarrassing than that. 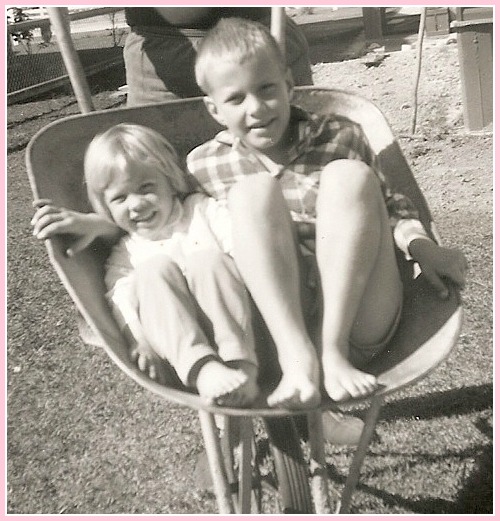 Like any younger sibling, I spent much of my early years following my older brother around. PJ is 3yrs and 10mths older than me and although I’m sure he was overjoyed by my company (?!) he did *ahem* sometimes do his damnedest to rid himself of me.

Our street was a peaceful cul-de-sac and back then we knew almost everyone in the street. Indeed, about 1/3 of the street (which was – and still is – about 16 houses long) comprised families with kids vaguely our age.

On this particular day PJ and our neighbour (the slightly older Cathy) were riding their bikes around and (possibly)  trying to ditch yours truly who wouldn’t leave them alone. Undoubtedly PJ was under instructions from my mother to keep his eye on me, but – although my company was much-desired even then – my 7 year old brother was probably less enthralled at the notion of ‘playing with his sister’.

What I can remember is that he and Cathy went riding off down the street (the non cul-de-sac end) with me frantically chasing them on foot.

Next thing I know they’ve disappeared (obviously looping around the block) leaving me at the end of the street. Alone. Lost.

I started crying and the rest is a bit vague. But, I do remember a policeman coming up to me and asking where I lived.

“I don’t know,” I bawled – standing there on the corner, just 7 houses down from my own  house.

I gather the officer was bundling me in his car when my brother and Cathy came cycling up. PJ was beside himself. I can’t really remember what happened next – other than PJ claiming me as his sister. He was convincing enough that the police officer let me go with him, and I remember the incredible fear disappearing into thin air. All was well again. PJ had come for me.

The next thing I remember is lying on my parents bed regaling them with the story (I was a story-teller even back then!). In retrospect (ie. decades later) I’m fairly sure they were horrified and my brother in huge trouble. 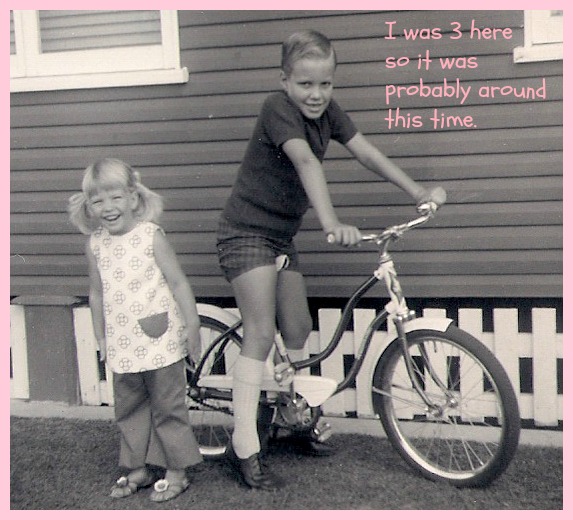 My brother’s memories of our childhood are mostly crystal clear. Mine are murky. So to confirm my recollection I called my mother before writing this.

Forty years later I’m struck by a range of questions.

“Did someone call the police?” I asked. Our street was in the suburbs of a small town – the likelihood of a police car happening upon me is virtually zero.

But, it’s strange nonetheless. We cannot remember the length of time for which I was lost. It could have been just minutes while my brother rode around the block, or perhaps he continued to play before realising I was missing.

I was obviously terrified at the time, but my strongest memories of that day though are: my brother frantically cycling along the street to find me; and lying on my parents’ bed, as dad changed out of his work clothes, telling them about my exciting exploits.

Did you ever get lost or lose your kids? Was ‘being found’ the thing you / they remember the most?