It’s been a thing on Instagram and Facebook… the ten year comparison: sharing pics of ourselves from ‘then’ and ‘now’. I think the intent is to consider how much we’ve changed: aged – for better or worse; or perhaps (on a less cynical note) to consider how our lives have changed. Or something. And then of course there’s the theory that we’re all helping Facebook (and whoever) improve their facial recognition software….

However I’ve only just realised that ten years ago (this month) was a momentous occasion for me. Cos it was then I started blogging! Ta Da!

It’s kinda depressing that my blog hasn’t grown into a world-wide phenomenon but whatevs… people have no taste, what can I say?! 😉 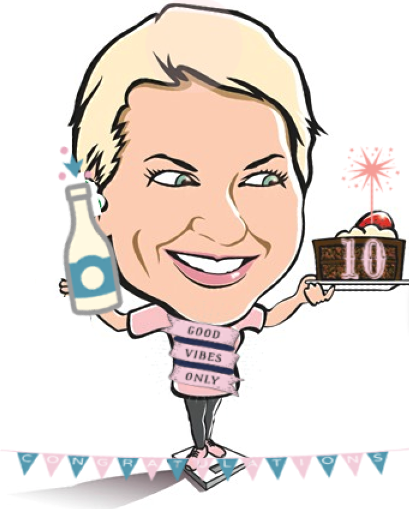 However, Debbish has gone through its fair share of iterations since its birth in January 2009 and I thought I should celebrate them rather than wallow in my lack of fame, fortune, success ‘n’ stuff!

I actually started a blog called Write About Now on another blogging platform. I think it still exists but I’m not sure. Then everyone raved about the platform I use now (WordPress for those in the know) so I switched and copied ‘most’ of my posts over (not all as some were angsty things about my attempts to become a mother!).

I didn’t promote them at the time as my main intent was to (just) be brave enough to share my writing with the world… I didn’t necessarily need to draw attention to it. (And I felt the same recently publishing some old excerpts from draft novels here.)

A year later I started a separate blog about my dieting adventures. Diet Schmiet actually outgrew Write About Now pretty quickly though it was more a brain dump. The original website involved the planning and drafting of posts (in Word documents) and endless editing before publishing, rather than spewing thoughts onto the screen. Interestingly people seemed to like the thought vomits of Diet Schmiet more…

In 2012 I paid for both blogs to be self-hosted – which doesn’t mean much to non-blogging people, but just means I stepped them up a level and it allowed me to do paid or sponsored stuff on my blogs if I wished. I took the opportunity to rename Write About Now to Debbish (and change the associated social media handles / names over) and had banners designed for both sites so they looked more professional. I’m still using a version of the Debbish banner now though it probably needs a redesign.

My foray into sponsored posts didn’t really eventuate as I contemplated whether I was prepared to sell my soul for 6 packets of crisps and the like. Don’t get me wrong, I was paid a decent amount for some posts but struggled with where to draw the line.

The death of Diet Schmiet

In early 2014 I decided to merge my blogs. It would have made sense to have Diet Schmiet subsume the much smaller Debbish, but – though Diet Schmiet was very much the authentic ‘me’ – Debbish felt more like the person I wanted to be. I was tired of my life being about dieting and exercise and it was around the same time I completely dropped off all of the networking I’d been doing with other health and fitness bloggers.

So Diet Schmiet just became a ‘category’ or theme in Debbish.

It was also around this same time I started reviewing books – though I had written about some (as well as television and movies) earlier – as they’ve always been a passion.

I realise I could have been ‘better’ recognised for my book reviewing had I separated them into two sites but – quite frankly – couldn’t be arsed.

So here’s where I stand. Sadly I can’t offer up total visitor numbers because of the number of times I’ve killed off a blog and its followers, but still… there’s a lot of work that’s gone into those (almost) 1950 posts… not to mention the drafts! 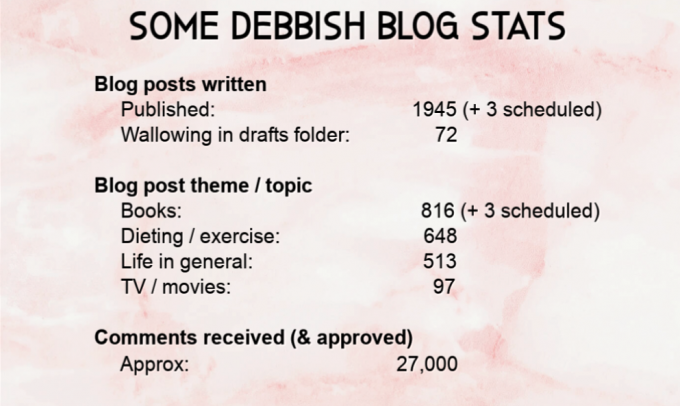 Of course, I should also mention I’ve been having the ‘Are blogs dead?’ conversations with a group of book reviewers. The jury is still out on that one but it does make me wonder if there’s more interest in short book reviews on Instagram than in blogs; or a preference for Facebook conversations about the meaning of life; or podcasts that don’t need a response at all but can be easily listened-to when the time suits.

What would you like to see more or less of? From me and others online?