I didn’t really touch on it in Tuesday’s post, but the reason I’m not starting my new job for two weeks is because a cousin had asked if I’d help out in his office while he’s on holidays. He has a couple of staff but as he and his wife will be away he really needed someone to help answer phones etc. His offer came in before I had my other job and I’d thought ‘Why not?’ especially because he’d told me I could continue with my own writing while here.

The idea of working full-time for 2 weeks was a bit overwhelming, but as I’d signed up for NaNoWriMo, I figured I could actually dedicate several hours a day to working on my November novel.

I’m also going to have a look at his website (and do a bit of rewriting) and focus my wit and expertise to his existing radio ads.

I’m only a few days in and – so far so good – well in terms of the office. The novel’s going nowhere fast, but I’ve managed the phones, started rearranging the files and haven’t alienated my fellow employees too much. 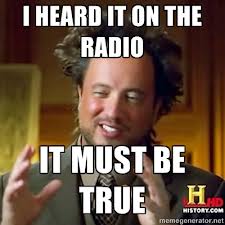 However… like many small offices, we have a radio on during the day. Mostly I zone out until a song I like stirs me out of my reverie. But… as the days have progressed I’ve become increasing aware that the local station is affiliated with a network renowned for its scary talkback radio hosts!

I know the shock jocks get their name for a reason and their ratings come from stirring the pot, but seriously they cannot believe all of the drivel they espouse.

I’ve existed in this world long enough to know there are those out there whose beliefs differ from my own. And while they’re OBVIOUSLY wrong and far less-evolved ;-), I know it’s sensible to accept the fact and not let their idiocy (re. immigration, government legislation, politics, same sex marriage etc) impact significantly on my mood. 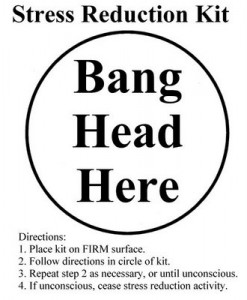 However, there are many malleable minds out there who believe everything they read or hear. I don’t get the allure of talkback radio or current affairs shows so I guess I’m not their target audience, but it worries me that even sane people* can be influenced by what they hear.

In a perfect world I could happily avoid such programs. Indeed, I’m one of those people who hates others whining about inappropriate content on TV shows.

“Just bloody turn it off!” I’ll say. But… for a change I’m not in control of my current situation. It may not be *ahem* appropriate to rip the cord from the wall in response to the verbal garbage I’m forced to absorb.

I’m a little worried that it’s like some form of torture or worse – brain washing! 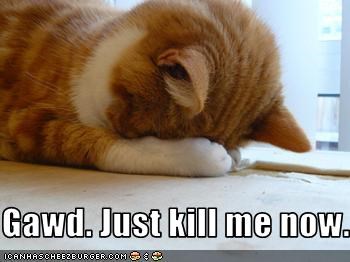 After 10 days of being indoctrinated with hate, ridiculous conservatism and general lunacy my mind will perhaps narrow to the point of closure and I’ll want to live in some sort of shiny white bubble.
(Or on the outskirts of a town, with a yard littered with rusting car skeletons, overgrown grass and old children’s toys.)

As I figure it, my choices are thus:

1. Confess to my colleagues that I can’t stand the drivel and hope I don’t insult them (given we still have over a week together!). Perhaps it’s my cousin who likes the show, or perhaps they believe it will appeal to their clients?!
2. Sneakily change the channel and hope no one notices.
3. Wear headphones, although that would be problematic given that I’m supposed to be answering the phone and watching for customers.
4. Tune out as best I can (it IS only a few hours each morning) and avoid absorbing anything I hear!

I should point out that I don’t hate all radio hosts. Indeed I do listen to shows when in my car in the afternoon, and have enjoyed ‘some’ breakfast shows.

Which choice do you recommend?
Any other suggestions?
Or perhaps you’re a talkback radio fan?

* My mother (a sane, sensible and smart woman) often relays stories to me which she’s seen on TV or in an email. Thankfully however, she hasn’t taken to wrapping her credit card in alfoil to thwart nefarious types who wander about scanning cards through people’s purses or wallets, but… she’s quite concerned about internet fraud and the like (which I guess isn’t necessarily a bad thing!).