Although I’d always wanted to go to Italy to predominantly go to Tuscany; Sorrento and Positano always leapt out at me as did Cinque Terre.

Planning my Italian trip – given the places I wanted to visit; the timing of the writing retreat; and parameters around getting away from work etc – was always a bit difficult. The places I wanted to go were stretched both north and south of Rome and I couldn’t work out any way to do the trip without retracing my steps in some way.

So, though I knew I’d have been flying for over 20hrs plus stops, I decided to head directly to Sorrento on arrival, to give me enough time there before heading to Florence and the writing retreat. I’d initially planned for 3 full days in Sorrento but I couldn’t quite make it work, so although I was there 3 nights, I had two full days as well as a few hours either side.

I arrived at Sorrento just before 7pm on my first night. Thankfully it was still light and I’d been able to have a good look at the towns nearby – Piano di Sorrento, Meta and Montechiaro – which were all so beautiful. I’ve already mentioned that my very-tolerant driver Emmanuel patiently answered my ‘Where are we now?’ and ‘What is that?’ questions the entire hour’s drive between Naples and Sorrento.

I hadn’t done a lot of research but decided I wanted to see Positano, obviously,  but felt like I SHOULD see Pompeii cos, well hello… old stones and buildings and stuff. (I really didn’t know much about it in all honesty!) And or Mt Vesuvius. As both are close to Naples I had a vague idea in my head I’d splash out again (money-wise) and book Emmanuel to drive me back to Naples with a Pompeii stopover enroute to Florence.

My hotel in Sorrento

I’d booked online and stayed at Hotel La Meridiana. It wasn’t fancy but pretty middle of the road for a European hotel I guess. I paid 510 Euros for 3 nights (about AUD825). The room was basic, as was the bathroom. There was no minibar / fridge or anything but it was quite quaintly traditional with tiled floors and timber built-in cabinetry. 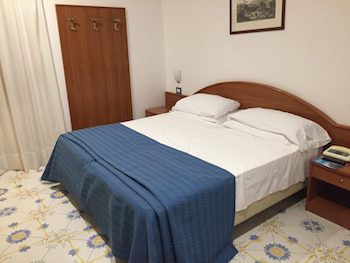 I noted some rooms had verandahs but mine only had a window overlooking a nearby pool. Its reception and restaurant looked quite nice and the restaurant seemed constantly busy with guests during mealtimes. I however mostly used the room as a place to crash so it definitely served its purpose. Plus – it was very very handy to everything!

I kept the full day free after my evening arrival and figured I would not want to rush about. After finishing up in my job, heading to the writers’ festival and the long trek to Sorrento, I decided I’d let myself spend day one just soaking up the atmosphere.

The streets of Sorrento

I was up and about unexpectedly early on the first day and headed off to explore Sorrento before 8am. Which was a good thing as I missed most of the crowds. The night of my arrival I’d gone to a nearby supermarket so had an idea of ‘which’ way everything was. So I put a map in my bag and headed off.

And later – as I watched some massive tour groups with their leaders carrying numbers or flags – I was very happy my time in Sorrento was just me meandering around the streets. I walked down the steps / cobblestone ramps to the ocean front (seaside or beach of sorts) and to the port (though took the elevator back up to the city centre – One euro well-spent).

Two bottles of water, a bottle of lemon diet coke, many iPhone photos and 10,000 steps later it was only 10.30 but I decided it was time for a break. I’d sussed out a few restaurants identified as ideal for coeliacs. Sadly a couple were only open at dinner and / or lunch, so I headed to Fauno Bar which sits right in the middle of a plaza or piazza thingy.

I suspect it’s very touristy, but it was perfect for my weary bones. It had a separate gluten free menu and the best gluten-free bread roll I’ve ever eaten. Of course I shouldn’t have as I couldn’t fit all of my pizza in, but they put it in a takeaway container and I (ahem) grazed on it all afternoon during my siesta and down-time.

As I was sitting there I realised it was still so early I could in fact, visit Pompeii that afternoon. I knew it was just a 30min train trip and my hotel was close to the station.

As I’d been warned the train from Sorrento (to Naples) via Pompeii was hot and packed. I eventually got a seat and had some respite from the hot air via open windows when the train was flying along.

The entrance ticket to Pompeii archeological site was 15 Euros and I paid 8 Euros for an audio guide (the latter also required the kiosk to hold onto some ID – passport etc – while you’ve got the phone). I wasn’t really sure what the audioguide would involve, but everything I’d read recommended it. I assumed I’d be tuning into something via our own mobile phones, but you’re given a phone with a map and recordings for each site.

Frankly – for me – given my lack of tolerance and hatred of ‘instructions’ it was a waste of money. I had no idea where I was at any time so it was pointless trying to listen to the audio. I did think to take headphones which was good as I saw many people pausing with the phone against their ear.

I know I should have been more impressed with Pompeii. It’s history – the earthquake and then erupting volcano at Mt Vesuvius – means it’s amazingly preserved and now being painstakingly maintained / rehabilitated as much as possible. The ruins are amazing, but I suspect my meh-ness was because I didn’t get entrenched in the story of what exactly I was seeing. Instead I found myself hot and bothered and ready to leave after an hour.

I was gobsmacked to see people with prams and walking sticks AND a couple of women wearing heels. The cobblestone streets (of Sorrento and other European towns) are a breeze compared to the rocky pathways and unexpected steps everywhere.

There were tour groups galore and a guide would probably make sense but I suspect they would be too slow and plodding for my low threshold for tolerance and boredom.

I strode about, took pictures and hydrated.

In fairness to Pompeii, it probably suffered a little in comparison to Siem Reap and the ruins of Angkor in Cambodia – which has been one of the only ‘tourist’ attractions to blow me away. I’m obviously far more delighted by towns built into mountains, cliffs looming over the ocean and narrow cobblestone streets than I am by the achievements of architects of bygone eras and mother nature.

There are also museums, bookshops and other displays onsite but I was incredibly hot, sticky and dehydrated after demolishing yet another bottle of water so didn’t muse at length, focussing more on getting to the train station for the hot trek back to Sorrento.