I’m fairly certain all of the parents out there are cursing at me now as the (in)famous song from Frozen will be stuck in their head all day.

But, this post actually evolved from something (well, a few things) I couldn’t bloody let go… until finally I realised there was no point holding onto them any more cos I was the only one being affected. 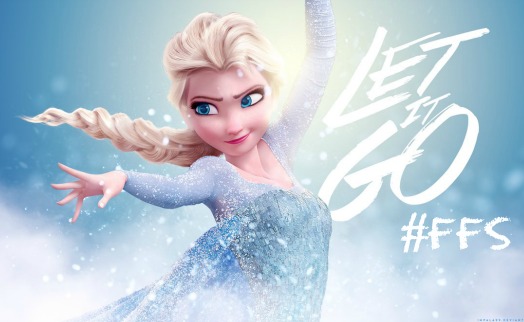 I try not to be easily irked, but like many people, I am. I’m far more zen than I once was, but people… rather than things tend to frustrate the bejesus out of me.

I was feeling upset early last week. It felt like a few people were kinda letting me down – in a work and personal sense.

As I waited for some resolution I became increasingly grumpy. And stressed.

And then – realisation struck as I was writing last week’s post. Which ironically was about realisation. D-oh!

I joke this kind of thing is because I’m self-absorbed and assume everything is about me me ME! I do realise – however – the people-pleaser in me worries too much about how I’m perceived by others.

It’s something I’m working on: catastrophising less and reality-checking my obsessive thoughts before they spin out of control. I need to get better at letting things go: at recognising that I need to take responsibility for my own thoughts and my own responses; and not making assumptions about others that ultimately means they ‘fail’ me in some way.

Are you good at letting things go? Do you waste time obsessing / stressing about things that you cannot control or that may not be true?