I recently had an online conversation with someone about a pair of shoes I’m coveting. I said my love for them was irrational and a friend queried why. I explained that I wasn’t really working at the moment and was poor (relatively speaking). Which meant I had to make sensible financial decisions.

I added the ‘relatively speaking’ because I tend to assume people know what I mean, but sometimes it’s important to be clear.

I’m prone to vague generalisations like that. I try to be clever or glib (plus I’m naturally lazy) so I throw words into my writing and conversations which aren’t entirely accurate.

Once upon a time I used to talk a lot about being ‘poor’. 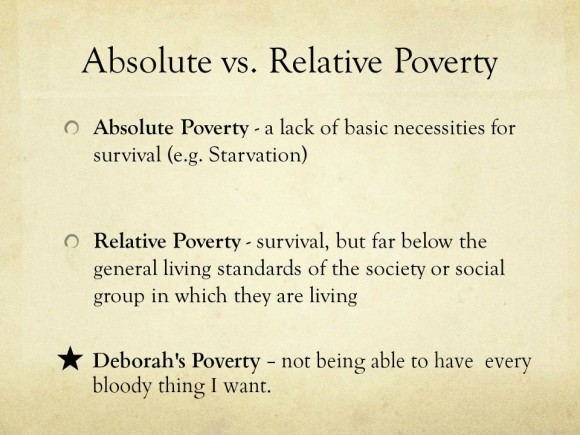 Don’t get me wrong, I’ve struggled. I grew up in a working class family and though my parents paid for my university education we didn’t have a lot of spare cash so I had minimal disposable income. When I first started working (and for many years after) I was occasionally pretty irresponsible with my money and regularly lived from pay packet to pay packet, often running out of cash just before payday.

Even later – after I’d bought property and was earning a good salary – I occasionally spent too freely and had to rein myself in. The early – mid 2000s was one such time. Sure I was in my 30s by then and on a pretty good wicket pay-wise but I also liked expensive clothes and was still in the pub / club going phase of my life. Once my mortgage payment had come out of my fortnightly salary the rest of it seemed to just disappear into the ether. I eventually reined in my spending and made some changes, but for a while I tried to remind myself that I needed to be careful.

“Deborah, you need to remember you’re poor!” I’d say to myself when I eyed off the latest Nicola Waite fashions.

It became my catch-cry.

And then one day I was with my brother, SIL and niece. We were watching something on television – and it may have even been an ad for World Vision or similar. And there was a comment about people living in poverty.

“What’s that?” my young niece asked and someone explained it mean that these people didn’t have access to essential needs and that they were poor.

Even though a dozen or more years have passed since that conversation I still remember how small I felt.

I’d spent nearly a decade of my life working in international development (in Africa, Cambodia, East Timor and the Pacific). I’d actually seen poverty and it was a long way from my inability to buy a $300 shirt.

I explained that I was kind-of joking when I said I was poor and I wasn’t really poor. That I was very lucky. Etcetera. 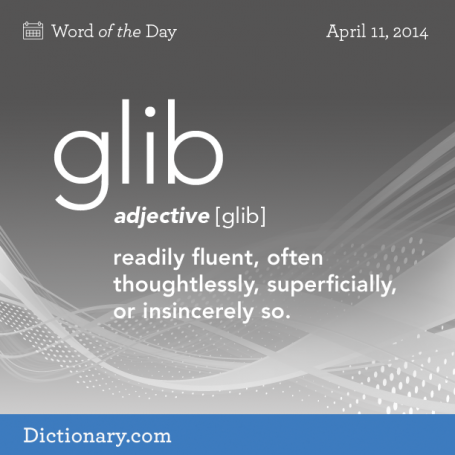 And now… so many years later I’m undoubtedly ‘poorer’ than I’ve been in a few decades. And again it’s relative. I have a very limited income and yet I drive a nice car and live in an apartment on the beach. I glibly say I’m poor because I can’t afford holidays or visits to the beautician or regular dinners out. Or clothes and shoes.

It’s a timely reminder however that we need to be careful with our words. We know they can be harmful, but they can also be misleading. Even accidentally!

Are you sometimes guilty of speaking glibly?

Linking up with Essentially Jess today for IBOT.