I was feeling a tad down last week. The why is a long and boring story, so I won’t go there… but needless to say I was wallowing, sleepless and surfing social media at ridiculous times of the night instead of sleeping.

In fact, I could NOT read my news feed without laughing.

Here’s a link to an article in case you missed it at the time, but essentially… the UK’s Natural Environment Research Council (NERC – which is an indication they SHOULD have a sense of humour) decided to allow the public to suggest potential names for their new £200m research vessel.

The suggestions were wide and varied. Some sensible – the Endeavour and David Attenborough. And some not – Usain Boat and NottheTitanic for example. 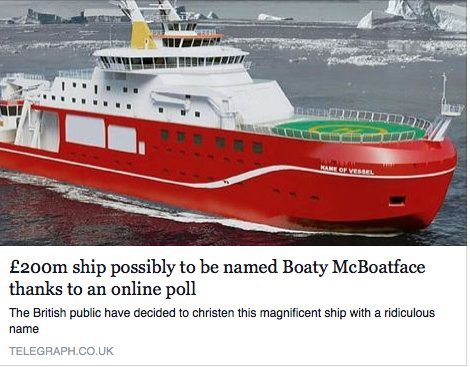 And then there was the ingenious Boaty McBoatface. And the suggestion took off.

Peeps on social media hashtagged the hell out of it and before too long it was trending.

Wait… let me say that again while attempting to keep a straight face, Boaty McBoatface. 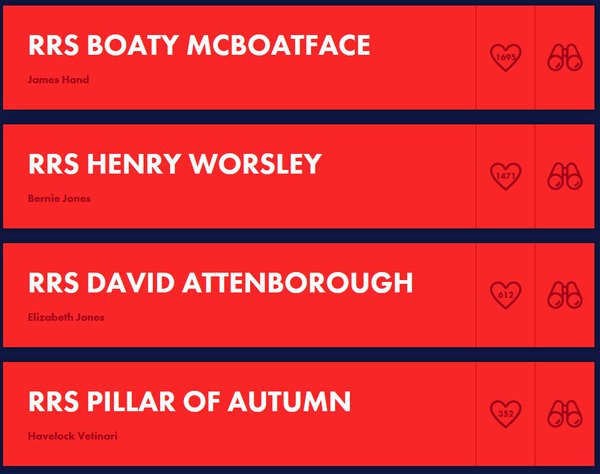 I read the Twitter feed and cackled more. Once again I had faith in the world and our ability to NOT take ourselves too seriously. And I was heartened to see good-natured acceptance from those who would really be required to add the ‘job location’ to their LinkedIn profile, including a scientist or two AND NERC themselves (who used the hashtag in their own tweets).

The whole thing reminded me of why social media is often a very good thing.

At its most basic, social media is a communication tool. We keep in touch with old school friends via Facebook and know what family members are up to via their Instagram feeds. We don’t get stuck on the phone for hours with a boring relative… we can simply hide their feed on Facebook – checking in only when we need to.

My own niece has just headed off overseas and her experience will be very different to my own (20 yrs ago) when my parents had to buy a fax machine and the budget only allowed for fortnightly reverse charge calls home.

It’s far harder for governments and corporations to withhold information and for people to be disadvantaged by their lack of access to mainstream media and free speech. Sure, not everyone in developing countries has an iPhone and spends their day on Twitter and Facebook, but… (although it’s given us the Kardashians and the like) it’s also been a social leveller in some ways.

We literally ‘know’ what’s happening around the other side of the world the moment it happens.

3. It connects us to our tribe

People tend to complain social media can be isolating. There are visions of middle aged ladies locked away instagramming their cats and sullen teen-aged boys trolling their mortal enemies on Snapchat.

However, it also reminds us we’re not alone. Virtual friends can be a healthy source of support. We can find like-minded people and – as I found recently – it can remind us that there are those happy to take the piss. Not everyone believes Donald Trump should be president. We find voices we respect. We find our tribe.

One of the reports I read said the name Boaty McBoatface, at 27,000 votes was 25,000 votes ahead of its closest rival. I also noted stern commentary reminding us this is an important ship, doing important work, and should be named thus. While some scientists and others have commented that they don’t really care either way… it doesn’t impact on their work and it’s just a name.

While I’d love it if NERC DID go with the hordes on this one… I suspect no matter what this boat’s named, it will be forever known to many as Boaty McBoatface.

Where do you stand on social media? Friend or foe? Or somewhere in between?
Would YOU vote for the name, Boaty McBoatface?