I know quite a few bloggers and avid social media users. Many of whom I’ve met in real life or just know fairly well – virtually (through their blogs and social media shares). Unlike yours truly, most are paired up and it recently occurred to me that they’re members of a one-social media-user couple.

While their partners ‘may’ have a Facebook or Twitter account, it’s the blogger who’s the social media freak (using the word in the nicest possible way). They’ve often shared stories of how their partner shakes their head as they Instagram their food or live-tweet a TV show… whether it be the intellectually stimulating #QandA or the #ohmygodIrememberthat Puberty Blues.

While I’m sure the partners of bloggers occasionally get frustrated at the constant social sharing… they ‘get’ it and USUALLY there’s still a decent amount of in-person sharing and conversation. 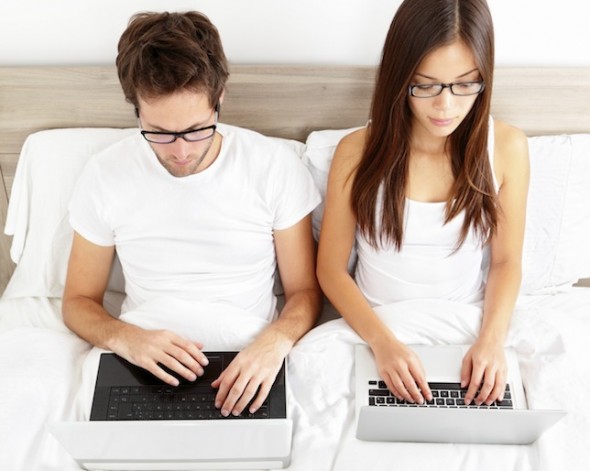 It makes me wonder about the whole opposites-attract thing…. the fact that (more often than not), only one of the pair are avid users of social media. Or could it be that it’s more of a female thing, with male partners less interested in (over)sharing.

And while I’m pondering things of no real importance, I’ve recently noticed rare instances of couples who both spend a lot of time on social media. Both will tweet about a TV show or event. Separately. I find myself wondering if they’re both sitting in front of the TV or lying in bed not talking to each other but instead tweeting or Facebooking their thoughts.

I’ve been known to *ahem* overdo my social media sharing from time to time. When I was on Instagram it was about sharing something (food, an event or experience) with those who weren’t there. Facebook is a bit the same. When it comes to Twitter, because I live alone I often tweet my thoughts about something or provide fabulously hilarious (!) commentary about some important issue.

Which is why I don’t understand why some couples constantly tweet about the same things. Rather than just talk about them. Obvs they’re sharing their thoughts with a wider audience, but still…?

Am I alone in pondering this conundrum?
Are you part of a one-person-social-media using couple? Do you think it’s a female thing?