After much deliberation (and procrastination) I finally have a new sofa. I’ve wanted one for years – even before I moved from Brisbane to Hervey Bay in October/November last year. My old one, which I left beside the road (for Council kerbside pickup) was reportedly gone within hours. I was sad to leave it, though with several extra rooms (and floors) in my old apartment, quite a bit had to go before the move took place.

The sofa in question was one I bought in Darwin in early 2000 and shipped to my bedroom in the Australian Embassy in Dili, East Timor. I was there on a two year posting (from late 1999) and it took about 16mths for our (sufficiently secure) accommodation to be built, so nine of us lived in (what I fondly termed) The Group House from Hell during that time. We had a shared lounge room but my bedroom with its pathetic little single bed, cupboard and chair needed some attention… hence me bringing in my own sofa. Quite frankly it was one of the best decisions I made while there. Living upstairs and working downstairs in quite a stressful environment meant that it was important for my room to be somewhat of a haven. And the comfy sofa helped.

Fast forward 12-13 years and many a bum-plant onto sofas for testing purposes and I finally found one I wanted at Nick Scali Furniture in Brisbane. And it was on sale. PERFECT!

I contemplated it for a few weeks – as I’m prone to do – but then went ahead with the order. Several days after I paid my deposit I was advised the colour I wanted wasn’t available. And subsequently told NO other colours were available – apparently they weren’t making any more Lucilla sofas. At all. Like ever. You’d think they’d know that before advertising it and taking orders, wouldn’t you?! Kindly they offered to repay me my $450 deposit WITHOUT taking an admin fee from it… Hmmm…

In all honesty I’d disliked the colour of the lounge on the showroom floor, however I was told that only IT was available, or one of the same colour in their warehouse. The grumpy part of me wanted to tell them to shove it, but… I was tired of the format of my lounge room. Three armchairs just weren’t cutting it. I couldn’t stretch out of sprawl anywhere other than my bed. (And the last thing I needed was an excuse to spend more time there!)

So, I grudgingly agreed to go ahead with the purchase of the colour – unfortunately called – GRANITE. (Incidentally I did try for a discount – given my chosen colour wasn’t available, but they weren’t having that! Bastards!) 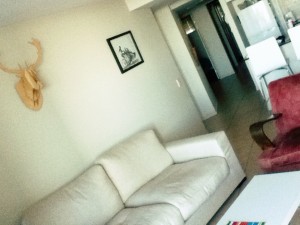 The sofa arrived last week. The colour isn’t as bad as I’d imagined – more cream than a boring beige/caramel tone, which is fortunate.

I’ve done some rearranging (and am now having to let go of my old faithful brown armchair, which has seen many a season come and go – and coincidentally bears the stains of many a nightly dinner!) and now just making final adjustments.

I have to admit I’m already loving the sofa. It’s comfy and I feel much happier, being able to sprawl out. 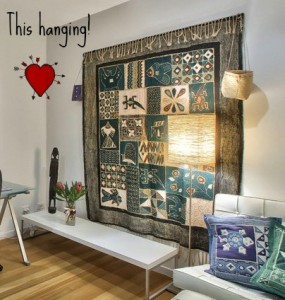 I’ve been trying to decide whether to put a wall hanging on the wall behind it. The sofa will hide half of the hanging, but I have no other wall space suitable (or available!). The colours ‘may’ clash a little with my other brights I’m instituting (like the TV cover!) but the hanging is a reminder of a life I lived a long time ago and I don’t want it in a cupboard (which is where it lived for the first 8 years I had it!).

I was quite happy to attempt to hang the bloody thing (mounted on timber) on the slightly curved wall, but my mother has convinced me to ask my (handy with tools) uncle for help… so I’ll do that grudgingly (and bribe he and my aunt with champagne so I feel less guilty).

It’s been six months now since I made my sea change. When I talk of my apartment and my (still new) hometown, I call it ‘home’. Which is a good thing.

Just a few more tweaks and my life and happiness will almost be complete!

What are your thoughts on the wall hanging? Should I put it up despite bottom half being hidden?
What makes your house a home?