I know many (MANY) people will envy the fact that I haven’t had to buy a book for a few years. I receive more review books than I can read – including many I don’t request. And though there are often books I miss, because they’re not offered for review or I don’t get them, I haven’t had the time to go back and read them myself.

However… several years of including Amazon affiliate links here (the little images at the bottom of posts that some people occasionally click on to buy a book) means that I earn a little bit of money from them. Not much obviously as I recently received a payout of USD30 for about 3+ years of book sales. So… in case you’re wondering, I’m not getting rich anytime soon from the sales (though I do get $100-150/yr from Booktopia affiliate sales).

Anyhoo, I realised I needed to use this money so decided to use it to download an audio book for a recent road trip. Which of course is when I realised that: 1. Amazon gift vouchers don’t transfer to audible audiobooks; and 2. They’re only available via the US site not the Australian site.

I didn’t know this at the time and – after discovering I couldn’t download the audio version of Mark Manson’s, The Subtle Art of Not Giving a F*ck, I decided to download the Kindle version. Cos I’d be getting it for free. Of course that’s when I discovered point (2) above and realised I’d accidentally bought the kindle book rather than downloading it via my free voucher. 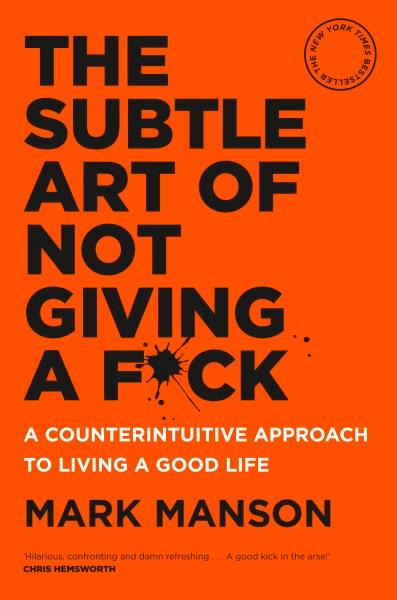 Fuck, I thought, but kinda vaguely remembered reading instructions re how to ‘listen’ to a kindle book, so figured it’d still be a good option for the road trip.

After much googling I discovered my option for listening to a book via narrator was to use the ‘voice control’ setting on my iPhone (General Settings > Accessbility) – for those vision-impaired and needing verbal instructions.

Eventually I worked out the settings and how to prep the book for continuous scrolling and set off on my (rather short) 4hr road trip.

And… it was friggin’ hilarious. Obviously the book’s not read by a person so it’s just Siri (or rather Karen ‘apparently’) reading in not-so-dulcet (ie. robotic) tones. And there’s a pause and a little sound at the end of each page.

So, not only do I get monotonal voice of Karen, but there’s often a short noise separating hyphenated words straddling two pages meaning they make no sense at all – reference to Manson’s Metallicus ( Metal- lick-us) tshirt of his youth comes to mind!

You’d think it would be a bad thing. But it actually wasn’t. Mostly. In fact, it made me need to listen more closely to the actual words (as if I was reading) than the voice. And Siri / Karen’s pronunciation was often quite off so I had to really really focus.

For me (usually) the flip side of any audiobook is that I can’t ‘mark’ phrases or words I love (which I can do in a kindle / ebook by highlighting text or turning the corner of the page of a print copy)…. like the notion of our ‘identity solidifying’… 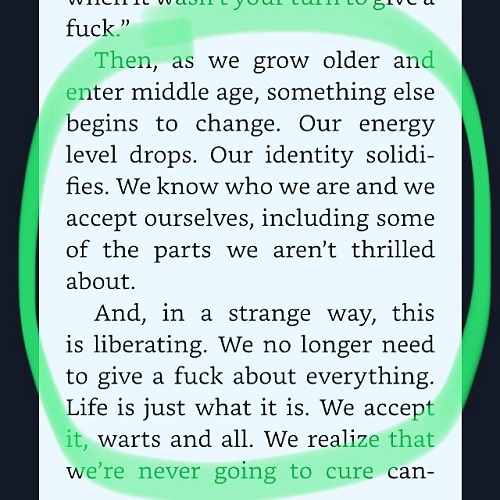 Hilariously the constant use of the word ‘fuck’ with no inflection or intonation at all is quite bizarre. Robotic obviously. And in many ways it disinfects or sanitises it. Not that I needed it. Being a big swearer from way back.

I’m actually not going to write about the book though I’m tempted. I’m really enjoying it, though Manson very clearly makes the point that those who are happy or contented don’t actually need to prove it (even to themselves), and it occurred to me that part of my need to write about the book is about the proof that I’ve read it. When really, no one other than me needs to give a fuck as to whether I’ve read the book, absorbed any of it or (indeed) taken heed.

As an aside, trying to turn the voice control off did make me give more of a fuck than I would normally cos I couldn’t shut the friggin’ thing down. It took quite a bit of maneuvering and it was as if Karen / Siri was goading me as she verbalised my frantic attempts to push any and all buttons on the phone to shut her up.

Have you read Manson’s book? Are you a fan of audiobooks? Or perhaps you have a Siri horror story?