I’ve delayed writing a blog post about my recent trip to China and Japan (and boat cruise which took me between the two countries).

Initially I wasn’t sure if I just needed time to process it all myself. But… it then occurred to me I just couldn’t work out ‘how’ to structure the post. There was no logical story arc in my mind.

A day-by-day account would usually work, except the days on the boat kinda blended into each other – in a nice way.

Another friend suggested I just go with the brain dump I’d started… which was tempting. Instead however, I’m giving you some combination of both.

Starting with our time in Shanghai.

What we did
Thankfully I ate non-stop from the moment my sister-in-law (SIL) and I arrived at the Qantas Club in Brisbane to the final flight to Shanghai; as we arrived at our hotel quite late and – although we OBVIOUSLY took the time to head to the rooftop bar for a drink – we skipped food and went to bed.

Speaking of which, VUE Bar (atop one of the towers of The Hyatt on the Bund) was stunning. It offers amazing views across the Huangpu River and is quite edgy in a literal and non-literal way – complete with a large hot spa and beds – for sitting on… #obvs. And even though it was 10pm on a Monday night, the place was packed!

The view of the other half of our hotel

My SIL forced (!!) me to do touristy stuff on the one day we had in Shanghai and we set off on foot along The Bund (essentially a waterfront area of Shanghai). 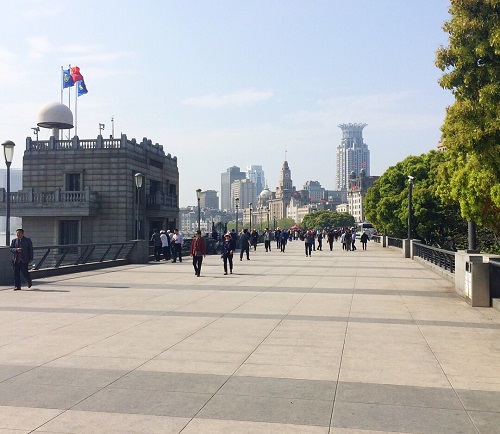 I can’t complain however cos there was minimal sightseeing (ie. looking at boring cathedrals, art galleries, wild animals and the like) and more ‘wandering’. The walk itself was great and pretty flat, and my feet didn’t actually hurt until we got back to the hotel many many hours later and I removed my Doc Martens.

It was – however – bloody hot and I spent up big on cold bottles of water. We didn’t really browse the markets as neither of us were in shopping mode, though we did wander through some of the upmarket shopping centres later in the day. At the time though it was as much to get out of the heat as anything.

We did visit Yu Garden (Yuyuan) – first built in 1559, which has undergone a number of repairs (and sections were still blocked off for rehabilitation when we were there). It’s quite impressive, though kinda treacherous* and not at all wheelchair friendly.

We also wandered past some very amazing architecture – both old and new – as well as People’s Square – a large public square in the Huangpu District.

We called in at a UK food chain so my SIL could have a decent coffee in the afternoon while I partook in a diet coke (or coke light, as it’s known there). I’d packed a protein bar in preparation so scoffed that rather than have to worry about translating my dietary needs.

Interestingly though the hotel’s room service menu listed gluten free options, when I asked at the breakfast and dinner buffets the staff struggled. Thankfully I had my Coeliac Society of Qld Mandarin & Cantonese translation printout; though rather than saying what I couldn’t eat, it gave examples of what I could eat…. so was a bit overwhelming for the staff who spent a bit of time wondering about the pork!

We pretty much headed to the ship after breakfast the next morning so the remainder of my time in China involved a lot of waiting and travelling in taxies.

Surprises
How clean Shanghai was! I’d heard not-so-pleasant things, so was gobsmacked. I realise of course though we were in a nice part of town, but still… even the smog wasn’t too bad. (Although it was much worse the day we were leaving a week later – but not black snot smoggy, which is my benchmark!) 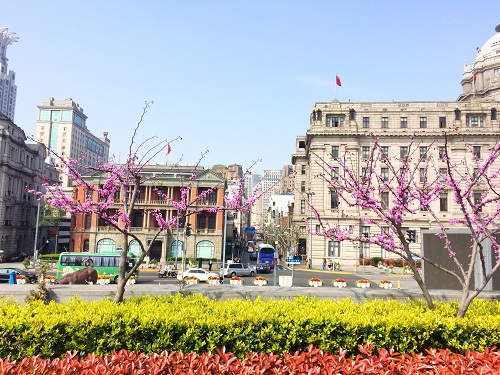 So much greenery. There was a lot of greenspace – even in the outer suburbs, not to mention some beautiful blooms. 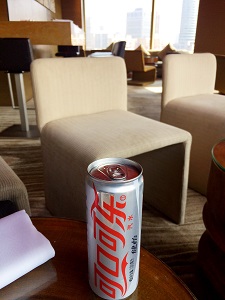 1. Upgrade!
(A recurring lesson!) My SIL had booked a club type thing in our Shanghai hotel. Don’t do it straight away, she said, but later when they offer it at a discount.

It gave us access to breakfast and dinners and (most importantly) free drinks from 5.30pm; not to mention, access to the private hotel lounge (bottled water and diet coke light!) all day.

2. Fire up Google maps when you catch a cab
Our drivers from the airport to the hotel and later from the ship to the airport both attempted to take us on very long-winded routes. Indeed, we went about 15kms out of our way on one trip until my SIL showed the driver she was tracking the route on Google maps!

* You have to watch where you’re walking (so have to look down), however… if you’re 5ft 10inches like me you’re likely to concuss yourself on craggy overhanging rocks you don’t see looming above you!