I’ve been struggling with cravings since last week. Hot and sweaty and enroute home from a Zumba class in my new hometown I decided I was too lazy to cook and stopped at the first ‘Asian’ takeaway I came to. Thai and Chinese are my favourites and the place I chose was Thai. After a few false starts I discovered which dishes could be made gluten-free (for I am coeliac) and left 25+minutes later (having been told 10mins) with two dishes and rice in hand.

I scoffed most of the meal that night and had the rest for breakfast the following morning. The garlic and pepper chicken was TO DIE FOR!

It kills me that I cannot cook Thai / Chinese food that tastes as good as the stuff I buy.

As so often is the case, it gave me a taste for something delicious and spicy and I’ve pondered the idea of takeaway almost every day since.

However, earlier this week I convinced myself I would be satisfied with a more logistically-simple option, available at a cafe just a few hundred metres from my apartment. 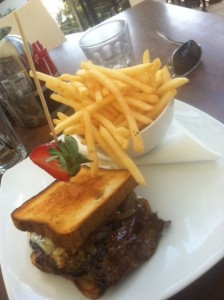 When I first arrived here I indulged in Salt Cafe‘s steak sandwich on gluten-free bread and served with chips a number of times. In fact, the friendly waitress who served me the day I hung out waiting to get into my apartment (while I waited for settlement and the removalist) remembered me each time I went back.

And before I knew it I was imagining myself biting into the sandwich, onion relish dripping down my chin.

For various reasons I didn’t get there yesterday so while phaffing about this morning I texted my aunt and uncle who live nearby, asking if they were keen to meet for lunch. Fortuitously we agreed on Salt and I sauntered down in the oppressive heat eager for my steak sandwich.

Once settled however, I was greeted by a waitress I didn’t know and handed a dodgy one page menu aptly named “Emergency Menu – available all day” and listing cereals, bread rolls, a couple of salads and chicken or ham toasted sandwiches. What. The. Fuck?!

“The gas is out,” the waitress explained.

Not convinced she wasn’t conspiring against me to avoid offering me the fulfillment I needed (ie. steak sandwich and chips) I turned to Twitter and Facebook to have this confirmed. And sure enough… my Facebook feed was full of local cafes and restaurants either announcing their reduced menus or sprouting that they use electricity and were offering their full array of food.

Apparently a gas pipeline was damaged a bit further north during our recent storms and until flood waters have receded it can’t be fixed… and there’s no gas. (I have to confess I’ve never really thought about where the gas comes from or how it gets here!) 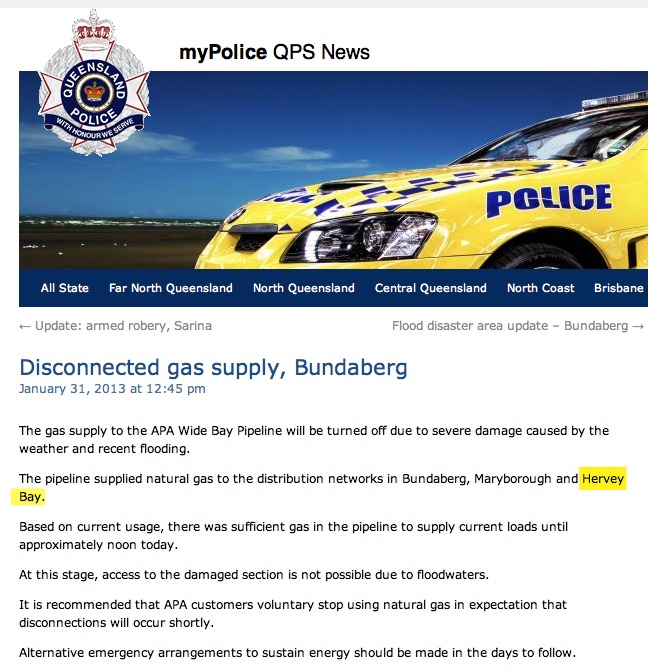 I’m not a gas-y girl you see. I’d love a BBQ but only gas makes sense and the notion of a gas bottle freaks me out. I’ve always bought places which have electric ovens and stovetops rather than gas cos of the whole ‘freaking me out’ thing. And… I always thought I would be the one to suffer – during an electricity outage; that I’d be regretting my no-gas decision.

And yet… here I am, still with electricity with which to cook, while the cafes and restaurants of Hervey Bay serve cereal.

Are you a gas or electricity person? Or perhaps both?

* Sem gas = without bubbles (in Portuguese and possibly similar in Spanish and Italian!)