I was struggling a little on the weekend. There was nothing major, just a few things colliding Bermuda Triangle-style making me edgy and irritable. The ongoing unemployment thing is obviously ever-present… as it’s almost a year since I finished my contract. Interestingly a similar position has come up with the same government agency but my confidence isn’t quite what it was, and I continue to ponder on how I was perceived.

And of course the full-time job vs having to make money doing freelancing and contract work remains something I can’t get my head around and the notion of financial security and life balance continues to vary from day to day.

Anyway… my patience was kinda tested on Saturday with a longer-than-planned outing and by the end I was feeling anxious about work I had to finish at home. And of course I don’t do well with lengthy periods in shopping centres. (As in, I avoid shopping centres at all costs and when I do need to go I’m very targeted in my approach. In and out.)

I skipped yoga Sunday morning as I was feeling a bit sore and wanted to get some work done for someone I was meeting and by the time I got home later I was hungry so scoffed a heap of unhealthy food. I felt full and unwell after the first batch, but went back a couple of hours later and had more. And then more.

The guilt raged within me. My weekend wasn’t as productive as I’d hoped. I felt confused about the job stuff. I keep telling myself I’ll join a gym and start doing some proper exercise. (Or at least walk.) And then there’s the unhealthy eating habits.

Everything felt very hopeless. And I was tired of feeling helpless and unable to be more in control of myself and my life.

Although I’m having a social media break, I’m still checking Facebook (off and on) on my desktop computer and this appeared via A Life in Progress. I like a lot of the stuff Krista shares and this (from Whole Self Wellness) about self-care was perfectly timed. 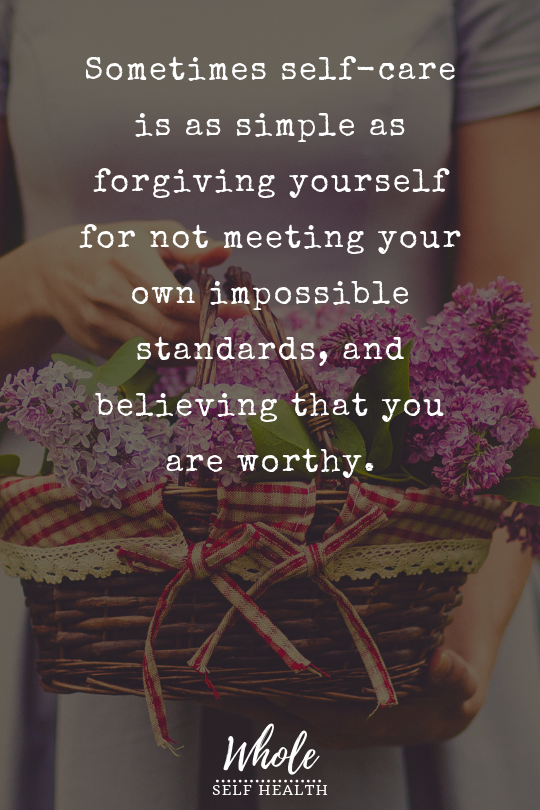 It appeared as I berated myself for eating a bag of chips and later a heap of chocolate.

I reminded myself I hadn’t killed anyone. I hadn’t hurt anyone (though possibly myself). And in reality, the pressure I tend to put on myself only comes from me.

Linking with Denyse Whelan whose (timely) theme today is self-care.