This morning I tweeted a picture of my scary hair. I was too lazy to do anything about it so ended up just going out wearing a cap. It was either that or stay home all day. 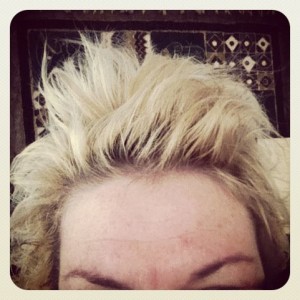 I haven’t had my hair cut since March. My last visit to the hairdresser – having decided I wanted to grow my hair into this style – was back in late April. That appointment just involved a colour, though my hairdresser did take out her trusty scissors and snip the hair at the back of my neck a bit – despite my protestations! (Note that I wasn’t opposed to the trim at the back: rather having to PAY an extra $100 for three or four snips of hair!). Fortunately she didn’t charge me for the pleasure.

Given the myriad of different hairstyles I have had over the years (hmmm… perhaps I should go with a collage?!) I am well versed in the excruciating pain that goes with growing one’s hair. Well… not physical pain, but rather that annoying phase during which one’s hair remains completely STYLELESS!

I almost feel obliged to wear a sign around my neck explaining that, I know my hair looks tragic as-is, but it’s GROWING…. therefore sitting atop my head in a clump. Worst still, there were moments this past week when it looked like Princess Diana’s circa early-mid 1980s. Scary much! 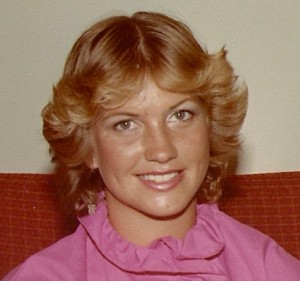 Sadly there’s nothing to do but wait out this phase. I’m almost due for another colour soon, so will again forbid my hairdresser from manoeuvering her scissors anywhere near my not-so-flowing tresses – thereby saving me money and hair-growing time. (We all know that when hairdressers SAY they’ll take a smidge off, they mean centimetres!)

They jury’s still out as to whether I can cope with this scary hair for the next 6+ months until it’s long enough to do something with. Perhaps we should take some wagers on my patience?!