Sometime in the lead-up to Easter I came across a Rocky Road recipe. I bookmarked it but (naturally) never found it again. However… my appetite was whetted and even though I was planning some Red Tulip Easter treats, I figured I could add some homemade Rocky Road to the long weekend’s menu.

Long time readers will know I’m not a cook. Even vaguely. I occasionally try new recipes but I take every shortcut possible. So, after much googling I discovered that Rocky Road was indeed something I could make easily and with minimal fuss.

It’s not rocket science. And it doesn’t even really require a recipe. In fact, it goes a little like this: 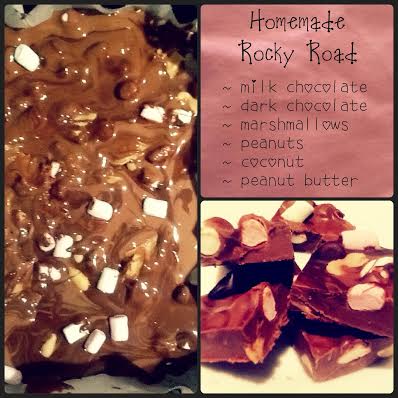 Of course there are variations and if you google recipes you’ll get an idea. My Easter RR involved small marshmallows, peanuts and globs of peanut butter. I also melted dark chocolate AND milk chocolate. Since then however, I’ve made a version with just the globs of peanuts butter, peanuts, melted milk chocolate and a swirl of melted white chocolate.

The inclusions are endless. My mother made her own as well but put things like Turkish Delight, Ginger and soft lollies in hers. I’m thinking liquorice could be yummy or even honeycomb etc.

Of course, it’s not *ahem* a particularly healthy recipe. However… it occurred to me last weekend that it can (in fact) be a portion-controlled treat. You could simply buy one (1) small chocolate bar and melt it over your fave things for a small after-dinner delicacy.

Have you ever made your own Rocky Road?
What would you include?

Wordless Wednesdaying with Trish from My Little Drummer Boys today.