I’m sorry… that title is kinda predictable isn’t it? I was trying to think of something a little less cliched, but well… it’s the last day of my trip and I’m dreading a lot of hours on planes tomorrow (well, today by the time this is published) with my sore gluteal muscle (ie. how on earth I’m going to sit for over 20+hrs (plus waiting and connection times). At least I’ll have ditched my luggage so I can roam around airports more easily.

Anyway, I’ve had three full days in Rome, the longest stay I’ve had (other than the writing retreat itself of course). I’m not sure if they would have been more productive had I been a little more mobile (physically) but suspect not.

I’ve already mentioned my meh-ness towards tourist stuff. I made a bit of a big deal about going map-less in Venice and not worrying too much about what I should be seeing but (in reality) I’ve been a little like that everywhere.

Here in Rome I knew I should go to the Trevi Fountain, Colosseum, Spanish Steps (though wasn’t really sure what they were about) and Pantheon. 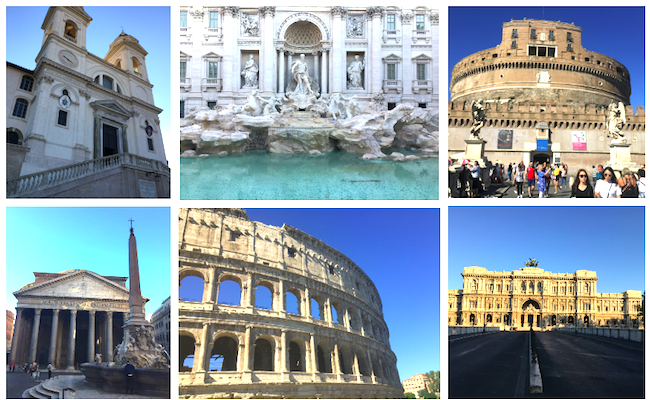 And happily I ticked all of those things off. I didn’t go inside any cos, meh. Queues, people (bloody tourists) and so forth. I stumbled across many a church and museum and castle and so forth and usually checked my google maps to see what exactly I should be appreciating before me and perhaps took a picture or two.

As usual the experiences I’ll remember are the unexpected ones. Sitting in a park drinking champagne watching the world go by and hawkers in action. 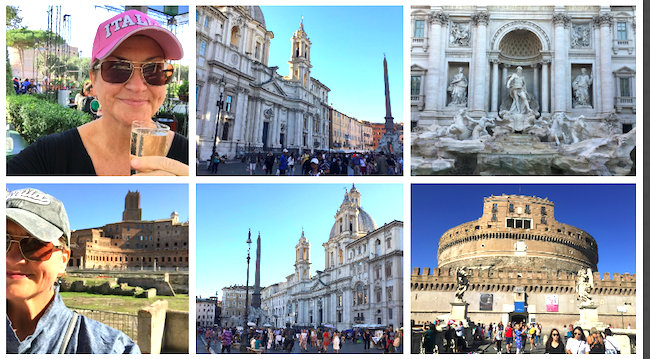 As in Florence I’ve also wandered for hours to find something that should have taken far less time. Bloody google maps. (Though in its defence I think it struggled to remember I’m on foot and didn’t need to take one-way streets. Also… it’s not a person so I don’t know why I’m bloody defending it cos it’s had me doubting myself constantly!)

The wandering – in each place – has been the thing I’ve enjoyed most. Some of the cobblestone streets near where I’m staying near Piazza Navona are crater-like. (If my suitcase makes it home with its wheels intact I’ll be shocked!) The buildings are all amazing – most refurbished in some way, but a few older more derelict ones (less than in Venice though).

Rome offers up expected greenery that I really didn’t see in Venice and Florence. Not grass as such but leafy vines over houses and cafes; and small garden beds adorning restaurant doors. The large piazzas all also have large pot plants blocking entry for cars and I wonder if that’s a response to the terror attacks by vehicles in some other capital cities. The large pot plants would certainly bring most cars to a stop and are far more attractive and less confronting than massive bollards.

My Airbnb has been great. Well located so incredibly handy to everything. The apartment itself is nice and minimalist in its furnishings, though could probably do with a bit of a spruce up in parts (when I compare it to a couple of other places I’ve stayed). Some light sockets and doors are falling off cupboards etc… But the view of the fountain and plaza from my windows is lovely.

I’ve continued to spend far too much on food and ‘may’ (ahem) have bought myself yet another expensive gift (costing almost the same as my overnight bag – which was (of course) a bargain. I’ll share some pics of my Lisa Corti (Home Textile Emporium) tablecloth and placemats once I get home cos I can’t be bothered de-bagging them here.

Food-wise it’s been a challenge. Some, but not all, places have gluten-free pasta. It’s the easy meal options I miss… although takeaway for coeliacs is hard in Australia as well.

Of course it was only on my final afternoon in Rome I found a nearby place (that hadn’t appeared on Trip Advisor’s Gluten Free Options listing) which offers stuff like risotto (as well as pastas etc) gluten-free, so it played host to my last supper.

I’ll publish this as I’m leaving the country. (You may have noticed I post my wrap-up posts after I leave each place. It’s only partly because of the privacy thing – ie. where I’m staying. Mostly cos I need time to process and to get mentally ready to move on.)