When I was at University, living at a residential college, after every major college social event there would be a ‘recovery’. Essentially it was some extension of the ‘hair of the dog’ scenario. It usually involved a guitarist (and songs by The Kinks, The Angels, Jimmy Barnes and the like), and beer. Lots of bleary-eyed 20 year olds with pounding heads would congregate to remind each other what they’d done the night before and compare war stories. (Note this was in the late 80s before the advent of the mobile telephone and digital camera, so nothing was documented on social media pages as it is today… when the world knows ‘about last night’ before the players can be reminded!)

Bizarrely I didn’t drink while at college (yes, I’ve certainly made up for it in the ensuing 20ish years!) so I was never in need of the ‘recovery’ but hung out there with friends nonetheless.

Today I participated in a recovery of a different kind…. well, sort of.

My mother is currently back in Brisbane for a long weekend in honour of my niece’s end-of-year ballet concert today. She’s actually staying with my brother, sister-in-law and niece for a few nights – given that she recently had over a month with me here; and the fact that they jet off to the US next week and will be away for Christmas. But… I was blessed to have her company last night and some of today. Naturally I had many-an-exciting activity planned.

Umm… no, actually that isn’t true. We had dinner down the road at a semi fast food place last night and today (after she attended church) we breakfasted at Cinema Cafe in Oxford Street at nearby Bulimba; which is where she and I brunched five or six weeks ago. It’s strange to think it was so long ago, because it seems like yesterday. But it wasn’t. Sadly. 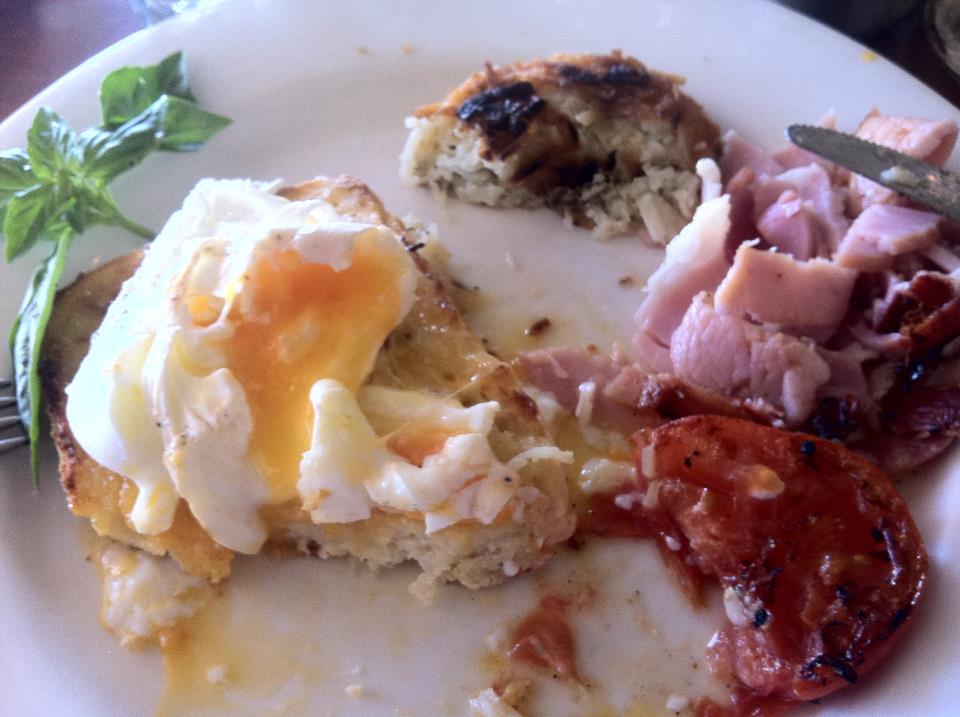 Action photo of my plate from brunch today

At the time mum was staying with me while my father was in hospital (initially) and then palliative care, for just over a month in total. My mother spent all day by his bedside, but on weekends my brother and I forced her to take half-days off while we sat with him instead. Just over a week before dad passed away, my brother did a morning shift and my mother and I went to Bulimba for breakfast. It was delicious and it felt decadent. Neither of us had done anything remotely ‘frivolous’ for several weeks and taking time to dine out felt a bit strange. And also liberating.

As a coeliac I was excited by the most-delicious gluten-free bread I can remember having. (I did ask where they get it – thinking I could visit their baker – but sadly it is made for them specially!)

And today we returned to the scene of the crime. I’m not saying it was cathartic and we are ‘all better’ for having done it, but we did talk and reminisce a bit about our last visit and about dad. The most important thing, mum said, was not to think about the last six weeks of his life as he faded away from us, but to think of his preceding seventy years, over forty of which we were privy to.

We’ll have many ‘firsts’ ahead of us: first Christmas without dad; New Year; birthday(s); Father’s Day; anniversary of his passing. And so forth. So, while I cannot think of him ‘being gone’ I will continue to try to think of him ‘having been here’.

To live in hearts we leave behind Is not to die. ~Thomas Campbell, “Hallowed Ground”