As this Sunday rolls around I’ve had my Gilmore Girls appetite sated, done a teensy bit of reading, and blogged a little. It also rained for a day or two so I’ve had an excuse for not watering my yard or exercising. So life – in my neck of the woods – is good.

I kicked off the week with Bernhard Schlink’s The Woman on the Stairs. It was a new arrival and short, so perfect for early in the week. (For those – like me – not in the know, Schlink was the author of The Reader.)

I then launched into Stephenie Meyer’s The Chemist – which I ended up eking out over 3-4 nights. It was looooong. And it was – occasionally – a struggle. But I was determined to persevere and I did.

It meant, however, that it was a lighter-than-usual reading week.

I blogged about some books:

Fearless by Fiona Higgins – a book set in Bali about a group of people wanting to overcome their fears, but faced with something they could never have imagined
When All the Girls Have Gone by Jayne Ann Krentz – a book I read weeks ago and review I scheduled in advance. (And I loved it!)

I also wrote about the fact my priorities are changing – as I discuss the fact I got airconditioning for my house – without really considering I could have done some long-overdue travel with that money.

And I talk about the comparison trap and my (perhaps everyone’s) habit of only comparing myself to those with more; rather than those with less.

I watched Gilmore Girls – A Year in the Life! As did half of the world I assume. My thoughts in brief….

But… despite those whinges, I really enjoyed it. My local bestie and I watched the final episode in season seven before bingeing on the 6hrs of new episodes (available here in my part of Australia from 6pm on Friday 25th).

I had some stuff done at home: airconditioning installed; a new security screen door installed; and have sorted out my garden irrigation. I’m compelled to now comment on my state of poverty, but know it’s a relative term and I’m actually far from ‘poor’.

After 11 new books last week I only had a couple of new arrivals this past week and I’ve already read the electronic version of one of them (and very much enjoyed it). 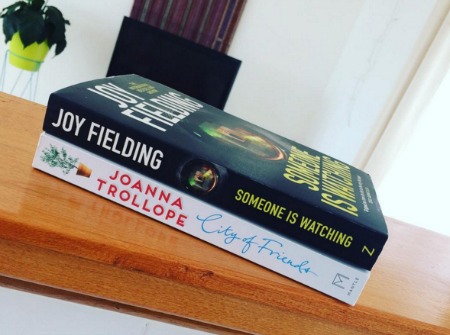 I’m about to also launch into another Netflix series and I was hoping for The 100 or Vikings, but sadly I’ve actually seen the series already on offer, so need to wait for the release of new seasons. I finished The Crown this past week and there are SO MANY things I want to watch I will be whimsical for a change and watch whatever jumps out at me at the time. And – although I’m monogamous when it comes to reading – I’m far sluttier when it comes to television and could happily watch several things at the same time.

And that’s about it for my reading and book blogging this week. I’ve got three book reviews scheduled for next week, so the readers out there might be relieved there’ll be less of the navel-gazing posts I’ve been sharing lately! 😉

What are your plans for the next week? Any reading?

As usual I’m linking up with Caffeinated Book Reviewer; and The Book Date for ‘It’s Monday!’