Old friends – not those of lofty years, but friends who’ve known me a while – might assume that this post will involve me bitching about driving.

I’ve always hated driving. Indeed I’m almost famous for it. When I sold my last car I’d averaged 3000km/year over a 10 year period, choosing to make regular trips to my parents by plane or train rather than drive. However, things started to change when I bought my mid-life crisis car and even more so when I moved late last year.

That’s not to say I don’t still hate driving. Cos I do. But… I do it more than I used to and it’s become a necessary evil.

My mother lives in my childhood hometown and while I moved into the ‘region’, it’s 42km from her place to mine (says the trusty odometer thingy on my car; which measures and times trips, tells the temperature and congratulates me on my singing. Okay, so maybe that last one was a lie!). Until recently I did the trip weekly, occasionally more. Laughable, I realise to those who commute between the two places daily. Indeed, the 40 minute drive (through town and on the highway) takes about the same time as my previous 4km commute back when I lived in the city.

However, in the last two months I’ve undertaken the trip far more as I’ve stayed with my mother after an operation and then travelled to and fro since. Indeed, although my mother’s well and truly on the mend, I’m still helping out with the washing, grocery shopping, cleaning and taking her to appointments and the like. And, a couple of Saturdays ago I did the trip four times (as I collected my mother to bring her to my new hometown for a family lunch before returning her home). 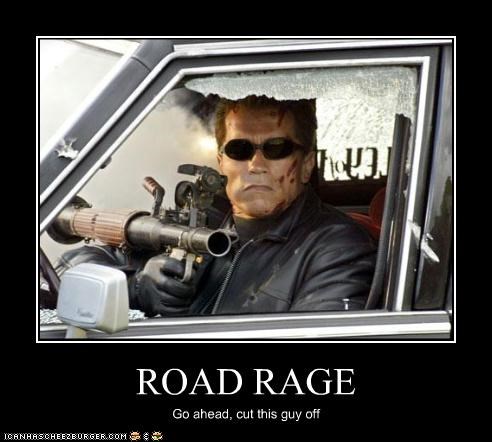 Because I’m doing the trip so regularly the drive is fast becoming second nature. It’s gotten to the point where I don’t mind it at all. However… it’s the other drivers that piss me off and tempt me to exhibit road rage to rival that of Michael Douglas in the movie Falling Down.

So, while I realise that most of these “THINGS OTHER DRIVERS DO THAT PISS ME OFF” are givens and frustrate many others, I just need to get them off my chest.

1. Driving at inconsistent speeds. I have cruise control on my car, so I can stick it on 6okm/hr or 100km/hr and know I’ll (mostly) sit on the same speed. There’s nothing worse than being behind someone who – one minute is doing 105km/hr and the next doing 90km/hr. Frustrating much?!

3. Speed up at overtaking lanes. I hate hate hate this. You’ve been stuck behind someone for yonks. They’re doing 90km/hr in a 100km/hr zone and finally you get to an overtaking lane… and what happens? They speed up, which means you need to speed up even more to get past them – risking a speeding ticket. Worse still, the same bloody driver then slows down after the overtaking lane. Bastards!!!

4. NOT slowing down at roadworks or for changes to the speed limit. This is a biggie for me at the moment as there are a lot of roadworks taking place. There are also some 80km zones JUST before 100km/hr zones recommence at overtaking lanes. So… you’ll be driving on the highway behind someone who is doing 90km/hr in a 100km/hr zone and then get to roadworks or a locale requiring you to drop to 80km/hr. You do so, but the bloody pesky driver in front of you doesn’t. They continue at their 90km/hr in the 80 zone. This means that you’ve dropped too far behind them to pass when you get to the increased speed of 100km/hr AND the passing lanes. (Regular drivers on the Maryborough / Hervey Bay road will know exactly where this is problematic!)

5. Drivers who turn out onto the road in front of you. There’s part of the road with a lot of properties and farms located on either side. Last week I was coasting along at 100km/hr and had to slam on my brakes as someone turned out onto the road just metres from me. This is particularly problematic at school drop off and pick up times. There’s a town on the Queensland Highway (Gympie) which is particularly annoying for this same reason – catching traffic travelling to or from work or school or those just going shopping. There’s no urgency for the drivers in question and as they do the trip regularly and seem to forget that there are others travelling much further distances. For this reason I’m all for building highways to bypass towns!

6. Tailgaters. Obviously. There’s nothing more annoying or intimidating than someone sitting RIGHT behind you – if you’re doing the speed limit. If you’re not then well… speed up for god’s sake (unless you have good reason) cos I may *ahem* have been known to tailgate those doing 20km/hr in a 60km/hr zone.

I’m sure my list of THINGS DRIVERS DO THAT PISS ME OFF could go on and on, but it’s making me grumpy and I have to head to my mother’s shortly…. so that’ll do for now.

Do you agree with my list?
Have I left something off?