I try not to be too divisive here. After all, I am a nice person*. But I feel compelled to have a bit of a rant about… mobility scooters. (Yes, it’s true… I take on the big issues in this blog!)

When making my post-redundancy seachange I moved to a town near my childhood hometown (one I knew well from my younger years and one more affordable than coastal towns near my state’s capital). However… it’s actually commonly known locally as:

The town of newly-weds and nearly-deads.

The local rag last week called it the perfect seachange for ‘battlers’. I’m not sure I’m a battler, but it’s kinda true. It’s also an incredibly popular retirement destination – particularly for southerners. Hervey Bay’s population is now about 70,000 (leaving nearby Maryborough in its wake) and many of those are from elsewhere. I’m told young people (post school age) can’t get out of here fast enough. (Which I guess I did back in the 1980s when I finished school in Maryborough and went to University.) Around the time I was moving here (almost two years ago) I was a bemused to see that the town was attempting to break some World Record involving the number of mobility scooters. Or something. We failed, I believe but I recently read that it’s time to again attempt to gain worldwide i fame.

I was prepared for them, but still agog on my move here about the sheer number of people using mobility scooters. My understanding of them was that they were predominantly for people who could no longer walk, or walk any distance. But… it seems to me (in some cases) they seem to have taken the place of cars when peeps in question can no longer drive or cannot afford cars. On some occasions you see scooters pull up and people agilely jump off them and enter shops to do their business; or scooters driven out onto the pier and before fishermen alight to fish. Fortunately we have a very long walking / running track along the esplanade – ideal for cyclists and scooter riders / drivers. In Queensland you have to register your motorised scooter (which isn’t the case in all other states). The only requirement re use seems to be that the scooter itself has been designed and built for a person with mobility issues. It doesn’t say the person has to have mobility issues. Quite frankly I really don’t care who does or doesn’t use a mobility scooter. I like that older people aren’t stuck at home or dependent on taxis. And kudos to others who save on motor vehicle costs by using a scooter instead. It’s just… kinda weird. Is it not? I mean, does it happen in other places, or is a Hervey Bay thing? 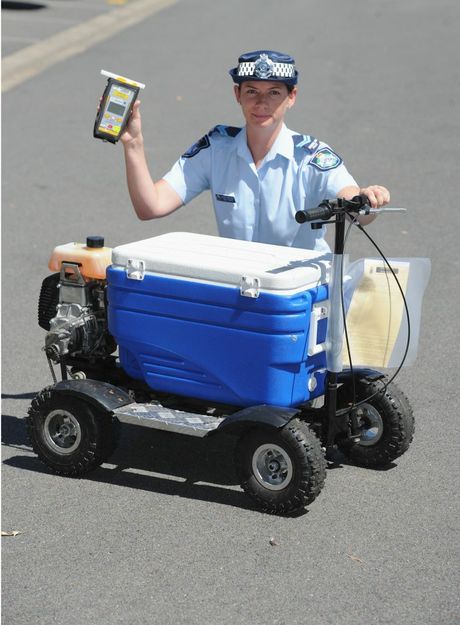 From the Fraser Coast Chronicle. Click on picture to read the article.

And then of course there’s the local guy who was arrested recently for drink driving on his motorised esky! Huge high five for the esky-on-wheels concept! (Not so much for the 0.3% blood alcohol level though!) As it’s Monday, I’m again joining the LaughLinkUp gang. * I’m not a nice person, but I pretend to be.