My home state of Queensland usually reflects the 1980s tourism slogan which has (somehow) stuck over intervening decades: Beautiful one day, perfect the next.

I’m fairly sure some of Australia’s more conservative social commentators think we Queenslanders have brought these catastrophic events on ourselves given the recent outcome of our state election (and the ousting of the conservative government). Of course it could be down to climate change. Or perhaps, as he’s told us on Twitter… God is just really pissed off with us. 😉

If you’re not following @TheTweetOfGod on Twitter, then you really need to as the account is HILARIOUS!!!

Firstly several kilometers of peeps were woken at 2am Monday morning by tremors, thanks to a 5.1 magnitude earthquake (inland from where I live). Naturally I woke and tweeted immediately! People were freaked. We don’t get earthquakes in Queensland. Indeed – graphics shared on social media confirmed the rare event. In terms of earthquakes measuring >5, we had one in 2011, and before that 1978, 1965, 1954 (etc).

I’d been through a few minor earthquakes when I lived overseas, so knew exactly what was happening the moment my bed and room started shaking. Having said that, my apartment shook in Cambodia (in 1997) when bombs went off nearby, but I thought that pretty unlikely here in Hervey Bay!

As I lay in bed flicking through social media images I was horrified to see a list of other ‘recent’ earthquakes, including several on the same day! The catatrophiser in me (who used to watch WAY too many disaster movies) wondered if this is how the end comes. Earthquake after earthquake until everything’s destroyed and people are left roaming the streets and starving to death. All leading to the rise of flesh-eating zombies of course. 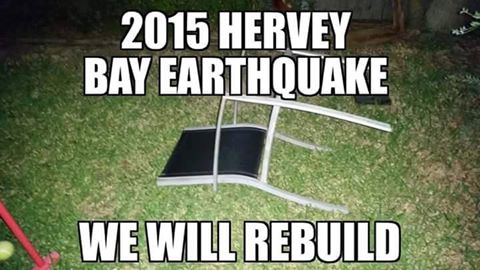 No sooner had we recovered from the trauma of the earthquake, when a bloody cyclone starts looming down on us. (Well two if you count the one about to descend upon the Northern Territory!)

But this one (named Marcia after the Brady Bunch’s favourite oldest daughter, currently appearing in Oz’s I’m a Celebrity Get Me Out of Here!)*  is not menacing the far north of the state where all good cyclones like to visit to kick back and catch some rays. Nope… the bloody cyclone is heading for Queensland’s central coast, just north of me! WTF?!

Peeps and houses in the north and far north are usually prepared for such eventualities. They actually listen to the TV ads reminding us to prepare our emergency kit. They’re expert in putting tape on windows and nailing down everything that moves. Elsewhere in the state we’re a bit softer. We’re unaccustomed to the harsh reality of mother nature. Sure we’ve coped with flash flooding and out-of-nowhere storms, but ‘tropical’ cyclones? Jaysus!!!

In my coastal hometown the shops are deserted. Not of people. There are heaps of them roaming the aisles looking bereft and panicked. It’s the shelves which are empty. Most organised types got in early and bought enough food to see them through the next millennia. 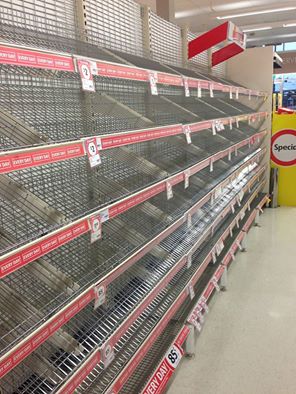 From the Fraser Coast Chronicle

By the time I called in for groceries (just my usual ‘I’ve run out of stuff’ shop) bread, milk and the like had all gone. Fortunately I only needed chocolate chips to make chocolate chip cookies, but because I’m almost as responsible and prepared as a girl scout I bought two packets to make a double batch. They’ll see me through the impending apocalypse and cold harsh winter.

But, before you take a swipe at me, rest assured I am taking Tropical Cyclone #MarciaMarciaMarcia seriously. I do live in an apartment (with glass balustrades and glass windows/doors, spanning its width) 50m from the ocean after all and we’re expecting king tides and big winds.

Although I forgot to buy batteries and the like, I have stacks of candles – all with nice scents to keep me calm. Some new books for review arrived yesterday AND… I’m keeping my phone, iPad and laptop charged for possible power outages. I do realise the internet will probably be down, but I can do some writing and document the adverse conditions in which we find ourselves — while eating choc chip cookies. (Oh, and before you start to worry, I did a big wine-shop last week so the dozen mixed reds / champagnes will last me at least a day or two!) 😉

Of course I do realise I’m not taking this disaster preparedness thing as seriously as I should. Those in South East Asia, Japan and Christchurch could certainly be forgiven for hating my sarcastic diatribe about tsunamis and earthquakes. But, it’s the rarity of them here that’s the weird thing.**

We’re so fortunate; and it’s only when bad stuff happens that we’re reminded of that.

Are you someone who’s well prepared for all eventualities? Any hints – other than having lots of cookies on hand?
Have you ever been through a traumatic natural disaster?

* Coincidence? I think not.
**Plus we like taking the piss out of ourselves. I used the Hervey Bay earthquake pic in my post Monday (read by a more international audience) and said that – we DO usually make sure no one’s been hurt or injured or suffered badly BEFORE we joke about stuff… but eventually we’re able to laugh at ourselves. Hopefully we’ll be doing so on the weekend after the cyclone turns around and exhausts itself out to sea.