I’m generally loath to delve into politics in a public forum, but today I just have to go there. Well, sort of. We’ve got a State Government election coming up in a week and even before a date was announced politicking started with a vengeance. Not only did the leaders of the major political parties start appearing at all sorts of tragic community events (and by that I mean the local fetes, not events commemorating tragedies… cos we’ve had a few of those) but we also had the t-shirt-wearing, sandwich board-wielding party faithfuls lurking on our street corners WEEKS before the election date was even announced. 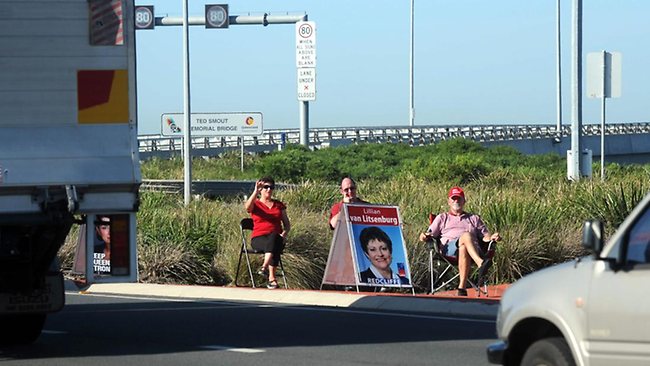 I can’t help but wonder if this happens in other places; in other cities, states and countries.

Last week, on my early morning less-than-10 minute walk to the train station I passed TWO such creatures (both from the same party… perhaps thinking familiarity doesn’t breed contempt!) and not for the first time I had to wonder about the point of it all. I mean, how on earth is a t-shirt-clad man or woman, sitting at a fold-up table in front of a ‘party’ sign and under a ‘party’ umbrella supposed to entice us to vote for their fearless leader? The two I passed last week were both males. One was leaning against a fence playing on his mobile phone. (Perhaps he was strategising, though more likely SMSing a buddy saying, ‘I’m so fucking bored!’). Whereas just 100m down the road another chappie was waving and cheering at cars as they passed.

Usually these intrepid creatures are only about on weekends, tormenting Saturday morning shoppers and others rushing about doing chores. Nary a corner can be found where someone isn’t ensconced, clad in their party’s colours. Again… I. DON’T. GET. THE. FUCKING. POINT. (Apologies for my language… although we all know politics is a dirty and fraught business!)

Despite the tenor of this post, I must confess I don’t blame the poor volunteers who give up their weekends for this malarkey. I just don’t get WHY THEY ARE THERE IN THE FIRST PLACE!?! I mean, it is the ‘done’ thing, but why. What purpose do they serve?

Years ago a friend was talked into handing out ‘how to vote’ cards for a particular political party on election day. She wasn’t a member of the party, but agreed when asked by a friend.

She said to me later, that she assumed she’d receive some sort of briefing beforehand. And she definitely assumed she’d meet the aspiring local politician and be expected to know something about his position on certain things and priorities for his local area. But… nope. She didn’t even meet the guy. Other than a chubby smiling face on a sign, she said she couldn’t have pointed him out in a lineup. In fact, as he had an unusual name she said her biggest fear was her ability to pronounce his name correctly as she thrust voting cards at unsuspecting passers-by.

Sadly, politics of any kind seems to be about smoke and mirrors and style over substance. I’m not naive enough to think otherwise. I cringe when I see the incessant television commercials, wondering how much money is being poured into the campaigns. Although… I suspect that’s nothing compared to the US (or similarly large nations) where political parties could feed an entire starving nation in Africa for a year on what they spend pandering to the masses.

The whole waste-of-money thing aside and back to our roadside volunteers. Like I said, I. DON’T. GET. THE. POINT. Surely there must be some purpose behind it? Some scientific or psychological study that indicates the regularity with which we see a particular party’s colours correlates somehow to the decision we make on voting day. Surely?!