I have finally made it. Not metaphorically of course. Fame and fortune are not yet mine, but I physically made it to Sorrento in Italy after an epic one and a half days of travel, which included planes, trains and an automobile.

Italy has been the only place I’ve ever really wanted to visit; a bucket-list place for me and I AM FINALLY HERE.

Of course I’ve talked at length about the why – the writing retreat and so forth. And after a tumultuous few weeks finishing up in a job (though on the last day I was offered a one month extension of sorts!!!! #longstory) I headed to Brisbane at some ungodly hour on Saturday morning for the Brisbane Writers’ Festival prior to flying out of the country on Sunday evening.

I’d had my brother and sister-in-law drop me at the airport by 8pm for my 11pm flight as I felt bad keeping them up on a school night.

The two-three hour wait there was fine. The ticketing, immigration and security stuff never takes as long as I expect so I easily had time to savour two glasses of prosecco at an airport bar while I caught up on blog reading and commenting. 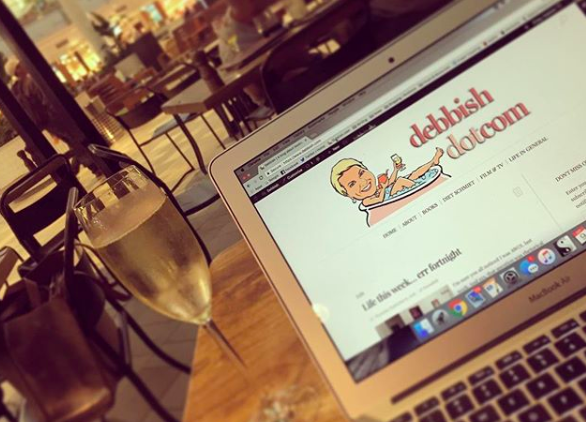 Sadly I was confined to a window seat in a bloody full row (which I bitched about on Twitter, natch) though the German couple sitting next to me were lovely. (Even if they did have a predilection for smooching… *insert vomit emoji*)

The first part of the flight was horrendous as I couldn’t get comfortable and was already overly tired. My inflight entertainment set didn’t work properly so I couldn’t watch anything and the person in front of me put their seat WAAAAY back.

Thankfully I managed an hour or two of sleep sometime during the 14hr flight and was surprisingly peppy when we disembarked in Dubai. Which was a good thing as we sat in buses on the tarmac forever and I had a two-hour wait for my 6hr connecting flight.

I was agog at the number of people awaiting the flight from Dubai to Rome. And I was in row 82. I didn’t even know row 82 existed! Small mercies however as there was a seat between my fellow row-sharer and I so it wasn’t as cramped.

The service on Emirates (I was on code share Qantas / Emirates flights) was far worse than the first leg however as the staff spent most of the time chatting to a woman (offering her expresso and either letting her go upstairs to first class or bunk down in their beds) and the meal service was late and mistimed. My gluten-free meal arrived an hour before everyone else’s meals and the drinks so I was trapped in my seat for nearly 2hrs before they came and took away our empty lunch trays.

Anyhoo, the disembarking and immigration stuff in Italy was a breeze and I caught the train from Fiumicino International Airport to the main Train Terminal with minimal ado.

I must say however that the main terminal was friggin chaotic. I love (and appreciate) that Europe offers signs in English EVERYWHERE, but (as I was early) I’d hoped to try to change my connecting express train to Naples and couldn’t work out where to go or who to ask. There seemed to be a huge rambling queue for a ‘take a number’ system at the ticketing office and after standing there for a long time I’d not gotten anywhere and the staff member had disappeared inside the office – which you couldn’t access before your number was called.

However… I found a ticketing agent selling tour tickets and went in there and for a mere 4 Euros they changed my train ticket for me and it was certainly worth not having to wait around in Rome where there was no seating at the Terminal and it was bloody hot.

The Frecciarossa (fast train) from Rome to Naples was fabulous. I’d upgraded to Business Class so we had stacks of space in our carriage. For some reason I thought it’d included a wine etc, but we were given water and a snack. I didn’t bother to try to ask about gluten-free options however as that seemed too hard.

The trip was made very speedy by train speeds (that I could see) up to nearly 300km/hr, though every time we got to 291km/hr my ears popped badly.

The countryside went by in a blur but it looked amazing.

Happily my last-minute email to the hotel (re the time change) for the car and driver I booked must have arrived as I was able to disembark and see a man awaiting me with my name on a sign.

Like other places in Europe and (most definitely) Asia, driving is scary as all hell. People just wedge themselves into spots and I’m constantly agog at the lack of accidents in the busy city streets. If there are road rules, I’m sure they’re either strictly adhered to, though only make sense to people here; or they’re disregarded completely.

My hotel had booked a driver of a transit van, Emmanuel (Ema Careservices), and he was surprised it was just me travelling. But I’d already decided the 100 Euros to NOT have to queue and stress about directions again was worth it. And Emmanuel was fabulous.

Most importantly he put up with my endless questions and provided some context as we drove along. He also allowed me to test my Italian vocabulary (which is non existent) on him, so I’d taken out my phone and its Italian speaking app to work out words for days of the week etc.

We stopped for a photograph at one point even though I was happy taking something out of the window and I was charmed by the villages / communities seemingly built into the sides of mountains, tunnels UNDER aforementioned mountains and then the views of the ocean splashing up against cliffs. It’s so different to our coastline…. and I don’t think I adequately explained my enraptured state to Emmanuel. Of course the same could be said for the tiny streets and old buildings. 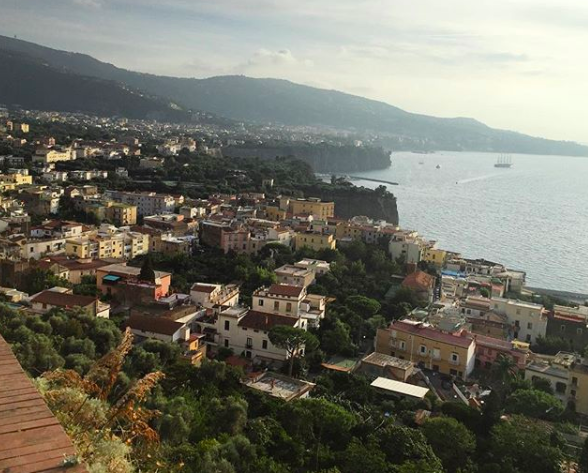 Had he had enough English or I enough Italian I would have asked him about his relatives – who live in Melbourne he told me – and their first thoughts on our towns and streets, compared to what they were used to.

Of course when I finally arrived at the hotel in Sorrento, THIRTY-ONE hrs after I’d left my brother’s I had some kerfuffle with the credit card booking for my room. (Thanks Commonwealth Bank for changing EVERYONE’S Gold Mastercards to Platinum Mastercards with a cut-off the day before I left for Europe!) I tried to explain that the booking had indeed been charged (and been paid) via my old credit card, but no, I did not have a copy of the credit card they could take because it no longer existed.

I was grumpier than I should have been with the guy at reception and will try to explain and apologise for that if I see him tonight. I’m not sure a long day or two of travel, pre-departure work-stress and the like really justify my shortness with him, though I was nicer after I’d gone out to buy a small bottle of prosescco and gluten-free chocolate biscuits and chips on which to dine before a much deserved and very overdue nap.

So there you have it. An overly long post about my journey (literal and mental) to Italy. It’s Tuesday morning here and I’ve been awake since about 3.30am Italy time and planning a pretty lazy day during which I soak up the Sorrento lifestyle… and battle my way through the throng of tourists!