Once upon a time I was an outdoorsy kinda person. As a kid I played in the yard with my brother and my friends. Growing up in a regional town I ran (and rode) around the streets after school and on weekends. My father in particular was a keen athlete so from a young age he had my brother and I in the yard hitting cricket or tennis balls high into the air for us to catch.

But at some point in the last 20 to 30 years I’ve become an indoors kinda-gal. It’s something I’ve been conscious of for a while but it really hit home earlier this week as I had someone coming by to give me a quote to get some trees trimmed and some weeds* sorted.

It would – of course – have made sense to take him into the back yard to show him the palm trees needing lopping and around the side of the house to show him the weeds. But no.

‘I don’t really go outside,’ I said on his arrival and walked him through my house so he could look at the back garden from my verandah and side steps from a small patio. 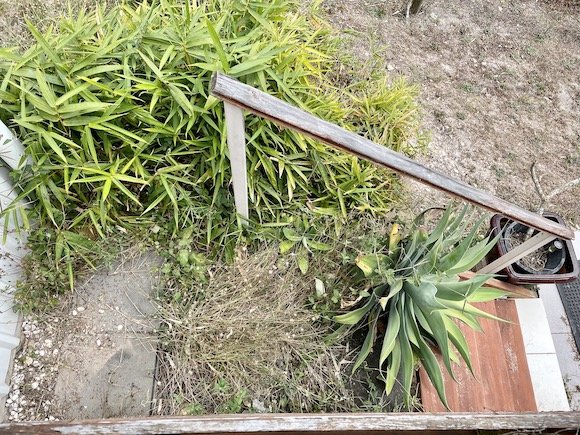 There are more timber stairs under those weeds at the top.

I’m not a gardener and certainly didn’t grow up in a gardening-loving family so it’s no surprise I have no desire to while away days digging in the dirt or watering stuff.

But it struck me that my resistance to going out into my yard has moved beyond the I don’t wanna get dirty or prickles or come across snakes stage and is now an aversion of sorts. I’m exactly the same at my mother’s. She uses her clothesline (unlike me) and I will do everything I can when staying there to avoid having to go and hang clothes out, instead putting things in the dryer or overcrowding her small carport clothesline with laundry.

I currently have a lovely back deck but only use it when I have visitors. Similarly, in my previous apartment RIGHT ON THE BEACH, I only used the verandah when someone else was there.

I lived in two different places in Brisbane before that – one with a nice outside patio area and the other with a nice deck and, despite putting a daybed on the deck, I only ever went out there when I ‘made’ myself – if I was having a drink on a weekend or (again) if I had visitors.

It’s not like I’m agoraphobic but I’m trying to remember when I became such an indoors person. I’ve searched my mind for previous places and my dwelling habits and cannot remember using an outdoor space since I left university (and residential college) and started living in houses and apartments.

Is it normal I wonder? Do distinct outdoors and indoors people exist or are most people both? And can you move between the two?

Either way, spending my days on the inside looking out is kinda weird. Even for me.

* Huge understatement as the weeds have taken over a set of never-used steps that lead to my never-used clothesline.