It’s very weird that I’m so averse to the beach – by which I mean the ocean, sand and sun – because I love being out on the water.

I think there’s some kind of selective memory thing happening because I forget [that] until I’m out there. And some of my favourite memories over recent years feature boat trips.

For my fiftieth birthday I rented a local catamaran (thingy) for a group of ten friends for a champagne and sunset tour. It was absolutely delightful. 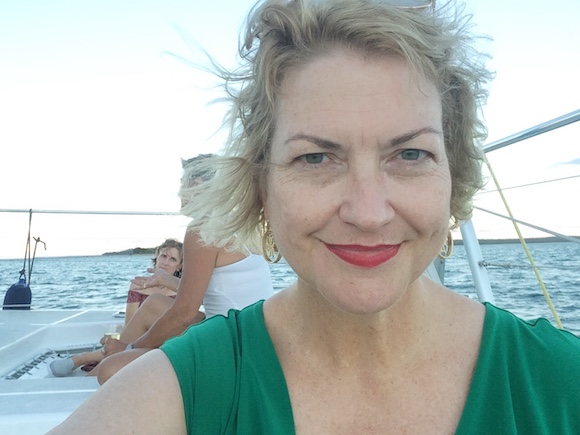 And in late 2018 I went on a boat trip along the Amalfi Coast when I went to Italy. We had a chance to swim while off the coast I was one of the people who voted we stop twice to do so. My friends back home were shocked given I rarely set foot in the calm waters off Hervey Bay, let alone leap off the side of a boat far from shore.

I must admit however I was promised by the captain that there were no sharks around. He said it was something to do with the lack of fish or something, but I believed him so wasn’t looking around for approaching fins. 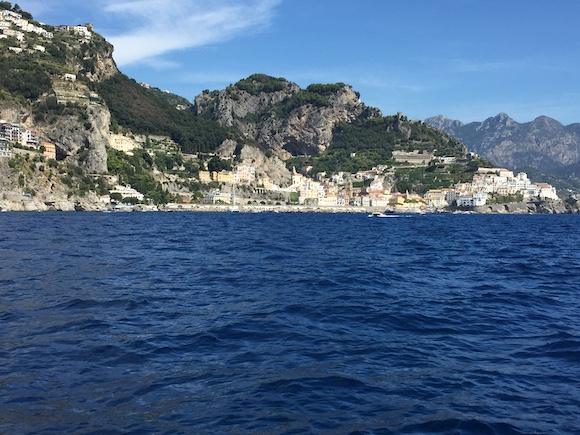 I used to swim in the ocean a lot. Growing up in nearby Maryborough meant we visited my grandfather and step-grandmother in Hervey Bay most weekends. And we always went swimming. My step-grandmother owned huts on nearby K’gari (Fraser Island) and we swam there all of the time. Having said that I recall neighbours calling out to us once they’d seen a shark and we bolted out of the water. I’m not sure I ever swam there again.

I actually have K’gari to blame for my dread of the ocean and shark phobia. Well, the island and Peter Benchley. I was still in primary school when I picked up Jaws. I assume I ran out of my own reading fodder and options were limited so it was probably that or my step-grandmother’s Victoria Holt or Mills & Boon. (Which I did read in later years there.)

It meant however I spent the entire barge-ride back to the mainland watching behind us for some massive shark to loom out of the ocean to take down the massive barge and the dozen or so vehicles on it.

My fear, or rather antipathy, towards the ocean is kinda sad really because I really do love being out ‘on’ the ocean. Generally on a vessel speeding along the waves.

I was reminded of this on the weekend. I had my godson over for a day or two and decided to treat us on a boat trip. We travelled along nearby K’gari and saw a very large turtle, a herd of dugong but the very best bit (the nine-year old’s perspective and probably mine as well) was that the boat had a boom net. Once out to sea, the boat’s crew lowered the net into the ocean and groups of us took it in turns to get in while the captain travelled at a lower speed, but still fast enough to have us cling to the sides for balance. 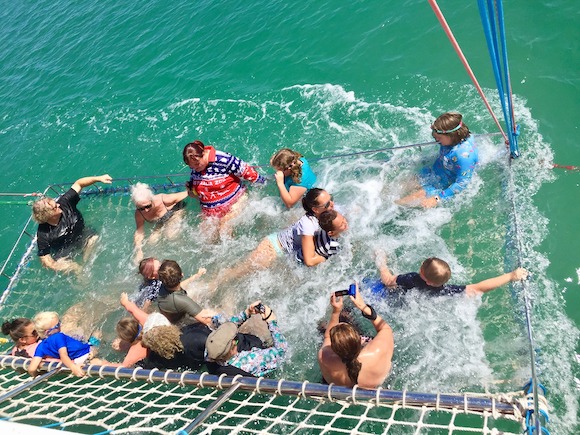 I’m not sure I would swim off the edge of a boat here without the net. I realise a net wouldn’t stop a shark but we were in fairly shallow water and I’m assuming someone was keeping an eye out for dark creatures beneath the sea.

The day reminded me how much I love being out on the water. Now I just need to find someone with a boat to take me zipping across the waves. But only for short stints because I still dislike the sun.

Are you a fan of the ocean? Being in it or on it? Or just watching from afar.