I’ll be honest and admit my mood has been yo-yoing around quite a bit lately. I’m trying to be upbeat… as I said last week, I know I’ve got nothing to moan about… I mean, sure I’m unemployed, single, childless, 50 and need to improve my diet and exercise regimes, but other than that… life is going swimmingly. 😉

I’ve been in a non-reading mood for a while. Well, I’m constantly behind in my book reviews and not allowed to read new books until I’ve caught up so, obviously I’ve replaced my reading habit with a just-as-healthy Netflix habit.

I watched season 2 of The Sinner – though had no reason to rewatch s1 as it’s a bit like a standalone series – new twisty mystery etc.

And though I planned to watch some chirpy (naff) Christmas movies I inexplicably started watching Dr Who (circa 2005) the other night.

I’ve not watched Dr Who since Tom Baker and his colourful scarf disappeared from our screens several decades ago. And even then I probably only watched it because I grew up in regional Queensland and we only had two TV channels (one of which only broadcast for part of the day)… however I tuned into the first episode of the current season of Dr Who as I like Jodie Whittaker (the new / latest Doctor) and though I’m not an addict I’m enjoying it enough to tune in week after week and love the humour in the show.

I started working on something new for NaNoWriMo (national novel writing month) but was worried my idea wouldn’t actually result in a 80,000 word novel (so then why bother, right?!). I don’t like short stories myself but I saw this quote recently about novellas and so am thinking I’ll just write the story and see where it takes me – without worrying how I’ll pad it out. 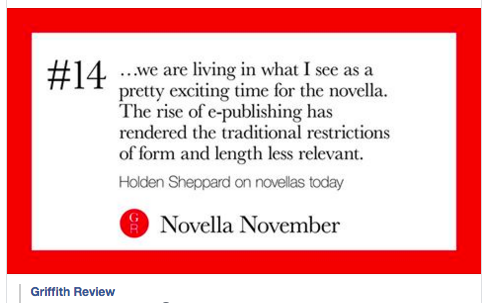 How I’m making an effort

Despite the opening paragraphs (which were meant to be tongue-in-cheek obvs) I’m making an effort to do the stuff I said (I would) since finishing my recent work contract and returning from my holiday.

I’m making an effort to dine out more… and just yesterday I went out for lunch – having a champagne while doing so and I caught up with relatives for dinner on the weekend. I’m making some small changes around my house – rearranging indoor plants; potting my new lemon tree on my deck (and it’s survived an entire week, so yay!) and I’m not stressing too much about work and bills, while also telling myself that I need to see this time as an opportunity. I mean, perhaps I’ll get desperate enough I’ll finally gather the bravado I need to pitch some articles to paying websites or magazines?!

Any Netflix or TV suggestions? Do you read short stories or novellas? Do you think they can work?

50 Shades of Age | And Anyways | Write of the Middle | Deep Fried Fruit.
An InLinkz Linkup