So, I’m going to a writers’ retreat in about 13 weeks. I’ve talked about it before…. ie.the writing retreat in Italy. *Flicks hair over shoulder with Cartier-clad fingers*

However, an obvious element to such a retreat is that we need to be writing something.

Indeed, the lovely Vanessa Carnevale has offered to look at our work and provide some feedback in advance.

I don’t like people reading my writing. Well, other than the blog of course (which doesn’t count)…. 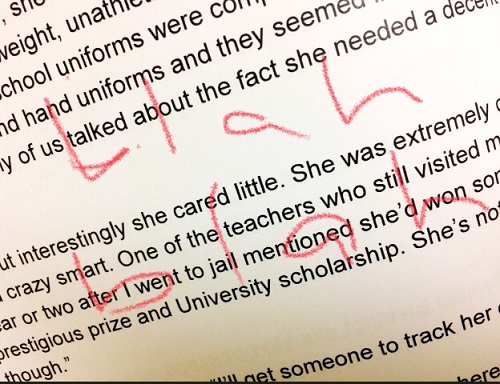 The clock is ticking away and I need to decide which novel I’m going to progress – if any – and as usual I’m asking for your advice. I might – as I’m wont to do – ignore it and do what I want anyway, but sometimes objective input is useful…

1. Young Adult novel – About 17yr old anorexic girl and impact it has on her and her family.
Pros:
– I’ve already got 30k words.
– I know where it’s going.
– It’s emo and fraught but easy to write… in some ways.

Cons:
– Even though I try not to make it about me people will think it’s about me (back when I was a 16-17yr old anorexic, of course!)
– My research is now a decade or more out of date!
– I’m worried I’m too old to write a YA novel.
– I’d want to do a massive edit before I kept going.

2. Psychological Suspense – A woman’s released from prison following new evidence and sets about trying to work out who might have been responsible for the murders for which she was convicted.
Pros:
– I have 50,000 words written on this.
– I know where it’s going and have written parts of the book across three timeframes so it’s a matter of piecing it all together now.

Cons:
– I think I should have finished this if it excited me enough.

3. Romance – A woman in 40s runs into a long lost love and their relationship is rekindled, but she worries he’s more in love with the old her than the 40-something her.
Pros:
– It’s light and easy to write.
– I’ve written about 10,000 words.
– I like the characters.

Cons:
– It feels a bit trite, like a middle-aged woman’s fantasy or something.
– I’m not sure I can get an entire novel out of it.

4. Psychological Suspense – young woman having recurring nightmares that she believes are visions / premonitions from something else happening in her life.
Pros:
– The idea excites me (inspires me).
– I think it’s edgy and interesting.

Cons:
– I’ve barely started and only know how it starts and finishes.
– I should have written something on it by now if I was motivated / interested enough.

So there you have it and given – regular readers in particular – have an idea of the sort of drivel I might / would write…
What sort of book would you like to read? What book do you think I’d have a chance of finishing? #Inrelatednews, do you think I’ll EVER finish one?