It recently occurred to me that there are two types of people in the world. Those who hate pockets in dresses or trousers. And insane people who seem to like having additional width added to their girth. Yes, really.

I suspect the pocket thing is an even hotter topic than the one I’m broaching today… but this post isn’t about pockets. It’s about travel. And a thought that jumped into my head the other day.

I’m not the sort of person who travels. I’m not a traveller.

It’s because I decided to do something on my bucket list. Not my #5before50 list which is pathetically wallowing with one-fifth complete. But my whole-of-life bucket list. I blame movies like A Room With a View and Stealing Beauty and similar, but I’ve always wanted to go to Italy. Or more specifically Tuscany.

My mother’s aware of this so I’m not sharing any macabre secrets when I say that my plan has been to take off after she passes away. Perhaps for a while. It’s not something I’m pining to do. It’s more something that I think I’ll ‘need’ because I will then be untethered. So – at least for the past 5 or so years – when I talk about Italy and my bucket list, that’s what I talk about, which is why I’m never publicly specific about when I’ll go. (As it could be in 20+ years time. I certainly hope so!)

Before that it was just some dream I had… one of those things I hoped to do…. one day.

Until my NZ trip to see my bestie last December I hadn’t been overseas for 14 years. And I hadn’t missed it at all. In fact, my ‘travel’ is kinda limited to a pretty brief period of time (between 1995 – 2002) during which I worked in international development. That involved working in Mozambique (a brief trip to Portugual to study Portuguese for 6wks) and some travel around south eastern Africa, Cambodia (some travel to nearby countries), Fiji, East Timor, Indonesia, Solomon Islands and Samoa.

It’s been easy to the use ‘I can’t afford it’ excuse as a reason not to travel overseas. I’ve had (and continue to have) a mortgage, which surely takes precedence over travel. I’ve had bills to pay. And – in more recent years – I’ve only worked part time.

But in reality, it occurs to me, it’s because it’s not been a priority. 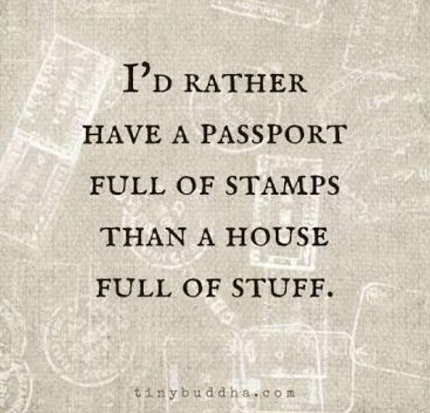 Umm… I’d rather have a house that feels like home.

I suspect this is ingrained (perhaps some weird combo of genetics and learned behaviour). My parents didn’t travel. All of our childhood holidays were to either set of grandparents or other relatives. Any other trips away or stays in motels were for sport.

My mother’s barely been out of Queensland and my parents have had one trip overseas (to NZ to visit my SIL’s family) in 1995. Even now, my mum’s friends are going on cruises or train trips and invite her. She says no. She’s really not at all interested she tells me.

And I ‘get’ that. Even when I had more money I rarely went ‘away’ for holidays. It was enough to have a break from work. I was happy to stay in my nice Brisbane apartment or visit mum and dad and so forth. And if I did go away it would have been to a nearby beachside involving minimal logistics.

My mother will probably feel bad that she and my dad have passed on their meh-ness towards a travelling life or antipathy towards travel. But it’s actually okay. It’s kinda who I am. Like sarcastic and astoundingly clever. 🙂

However, my recent posts about ‘putting life off’ and waiting caused me to ponder something I’d seen. Vanessa Carnevale, an author I like and have now met a few times is hosting a writing retreat in Tuscany next September. It’s around the end of the contract for my new full time job. And so, it felt a bit like the stars and planets were aligning in some way.

I tagged my mother on the Facebook post I shared about the retreat, indicating I wanted her opinion. “Was it frivolous?” I wondered. “Irresponsible?”

Of course it occurred to me that people travel overseas all of the time. And I tend to envy them. I don’t necessarily want to go, but I envy the fact they’ve gone.

I’m not the sort of person who travels. I’m not a traveller.

It seemed naughty or wrong or frivolous. Out of character at least. I have a mortgage. I need to get stuff fixed around my house. And did I mention my mortgage?

But…  it’s done. My deposit is paid. Obviously as I’ve not travelled to Europe (other than Portugal in 1995) I’ll need to do some planning and hoping I can afford a month or so away in total. I’m kinda tempted to pre-book packages but it occurs to me that I know so many people who’ve travelled that I can get advice and tips from friends. (Perhaps I need to set up a ‘Europe holiday advice to Deb’ Facebook page!

Obviously it’s a loooong way off so there’s no point in getting too excited but suspect I need to firm up some plans and book flights etc. Sometime soon.

Are you a traveller?