Mark Manson is in Australia at the moment. I remember noting he was coming and wishing I could go to hear him speak.

I’m not a MM devotee but I like his writing and reference his posts often because I can relate. I know the concepts he raises aren’t new or particularly earth-shattering but I like his blunt no-bullshit approach.

A couple of nights ago I was listening to The Three Levels of Self-Awareness for the gazillionith time when it hit me. I mean… I kind of knew this about myself but it was more confronting given my recent self-absorbed pity party.

He also talks though about the dangers of delving too deeply. He references an ‘apocryphal story’ from 16th-century India in which a young man visits a sage. Invited to ask anything the young man asks what the world rests upon. He’s told an elephant. (And yes, I know… WTF?!) He then asks what the elephant stands upon.

A turtle, says the wise man. What does the turtle rest on, the youngster asks. Another turtle said the old man. And… before the young man can ask the next (obvious) question he’s told… ‘It’s turtles all the way down’.

Manson talks about his propensity to overanalyse and like me (and many others) he second-guesses his thoughts and feelings and continues burrowing down until he’s stuck in some endless loop. But…

“It’s turtles all the way down,” he reminds us.

Basically he’s saying, at a certain point it’s not worth going further. Perhaps some of the Freudians out there with a psychodynamic bent will think we need to get to the bottom of anything and everything we think, feel, say and do. And I’ve always tended to be prone to that school of thought. 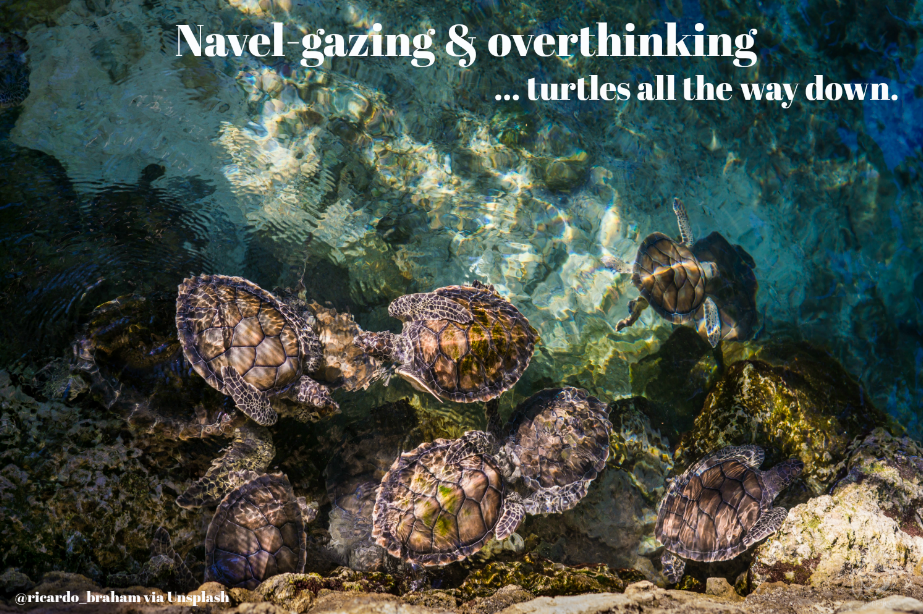 However… it means I often get stuck in the navel gazing spiral of doom.

I go around in circles because everything is interrelated. Or there is no answer.

I had a lot of therapy after being anorexic and bulimic as a youngster. I could hypothesise why I developed an eating disorder (which remains to this day via disordered eating), but I accepted years ago that there wasn’t going to be an ‘a-ha’ moment in which the lightbulb went on (or off) and I was ‘suddenly enlightened. I realised there perhaps is no ‘why’ or at least identifiable why. Or perhaps (and I suspect) there are many whys which combined in some sort of perfect storm.

As I write this I realise I often talk about self-awareness… or am conscious of my habits and propensities and yet, don’t seem to be able to do anything about them.

But… I’m going to make an effort to think of the turtles when my thinking or navel gazing starts to spiral.

Turtles all the way down. Draw a line in the sand (in my thinking and my mind) and stop right there.

Are you an overthinker? Do you have a way of reining in thoughts, feelings, or worries before they get out of control?

Linking up with the Midweek Midlife Gals and the Thursday Lovin Life Gang.