Many many moons ago I enrolled in a year-long novel-writing course. I’d never attempted a novel before as I’d never had any plot ideas. An opening scene came to me however… sadly based on my own experiences as a teenager grappling with anorexia nervosa (20yrs earlier), and once it leapt into my head it remained firmly planted; so I decided to make an attempt at removing it word by word.

The course itself was quite enjoyable though everyone (the tutor included) lost their mojo a few months before the year ended. So, my very rough 30,000 words (with about 2/3 of the story written) remained as they were.

About five years ago however, I decided (on the day it closed) to enter a local short story competition. In desperation I pulled out what I’d written years before and found 1000 words I could use (that ‘kinda’ worked as a stand-alone) and sent it off. It didn’t win anything, and though I hadn’t expected to, it did kinda feel like it confirmed what I’d written was crap.

I caught up with someone on the weekend who was one of the judges and she commented on the piece and said she remembered the dialogue being  strong. So…. I decided I’d be brave* and share it here. Please ignore confusing issues around first person present tense! 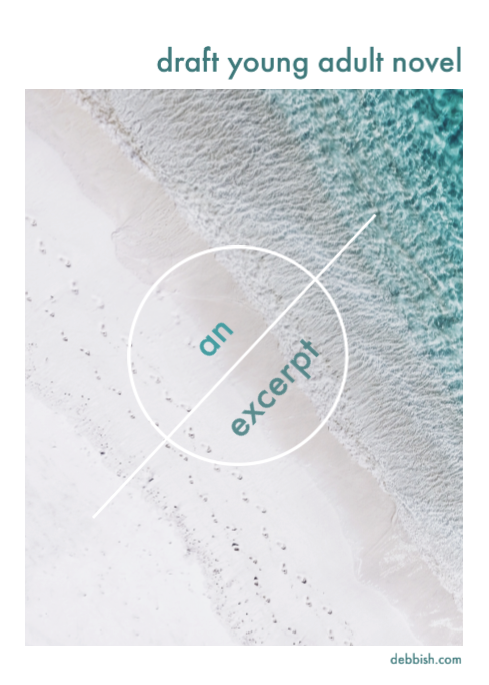 It is late afternoon when I wake. I hear voices and wonder briefly if my father is home; but as it’s still light out, I decide it’s probably the television.

I’m almost at the bottom of the stairs when I hear Judith’s voice. The thought of my much-older sister exhausts me. I catch words and phrases and know my mother is telling Miss I-Can-Do-No-Wrong about what happened earlier in the school principal’s office. I briefly consider returning to my room but am conscious they would have already heard my footsteps.

“Hi,” I fake perkiness as I join my mother and Judith in the kitchen.

“How are you feeling?” my mother puts her hand on my forehead. A smile loiters on my lips. The intimate gesture is something only mothers can do; and one which can mean so much more than a temperature check. I am suddenly touched by her maternal devotion.

“Mum, thanks. I feel better.” I am already trying to work out how to sell today’s events. I know that mum, and Judith in particular, will think that fainting in the principal’s office is dieting-related. I don’t want them to start going on about my weight. Again.

“You know, I think there is something going around and that’s probably what it is.”

Judith scoffs and makes no attempt to hide it.

“Why are you here? Shouldn’t you be at work?”

“Well, some of us like to make an effort when members of our family are in trouble.”

“Judith, your father had some meetings he couldn’t get out of which is the only reason he isn’t here.” My mother’s voice carries a warning.

“Why would he be here and why are YOU here?” I am feeling frustrated. I am tired of being the topic of discussion.

Judith is obviously just as pissed off. She leaps off the stool, “Because our mother rang me in tears. Because your teachers were worried you were about to pass out any minute and because the school is worried that you will fucking die on the school grounds.”

“What? That’s ridiculous. I was just feeling light-headed. I’m sure it’s just the flu or some virus.”

“That’s a load of shit and you know it. You just won’t admit it. But now you’ve gone and done it – got thrown out of school.”

My breath catches in panic, “I have not. I just have to stay home for a couple of days until I’m better. That’s all.” I turn to my mother for confirmation, “Isn’t it mum?”

My mother sighs, “Honey, I don’t know. The principal wants a medical certificate. He wants to make certain you are okay.”

“Of course I am. It’s all ridiculous.” And before I can stop it the fear in my chest turns to rage. “It’s fucking ridiculous.”

I know it’s coming but there’s nothing I can do. I pick up the dish in front of me and slam it onto the bench so it shatters into large heavy chunks.

I want to throw myself on the floor. My mind is on fire. I am babbling and I can’t stop.

But I need this to stop.

I start to leave but the anger is still burning and threatening to tear me apart. I need it gone.

I smash my forehead against the kitchen wall. Again and again. Until I can feel pain. I want to feel something. Or perhaps nothing.

My mother is shrieking and Judith stares. I punch the wall and the plaster cracks.

I run up the stairs to my room leaving the stunned silence behind me.

I can imagine the conversation downstairs and I know I should apologise. But I cannot stop crying. I am a mess.

The door opens and my mother appears. She comes over to my bed and sits down.

I want to ignore her. I want to hate her. I even want to hurt her. But I can’t; at least, not on purpose.

She shakes her head, “It’s okay.” But she’s crying too and this makes it worse.

She reaches down and gently puts her lips to my forehead. “Does it hurt?”

“No. Though my hand does. A bit.” I pull it out from under the cover to show her. It isn’t bleeding but a bruise is already appearing and my knuckles are swollen.

When she reappears with the icepack I have to ask, “What did she say?”

“Judith. Is she angry with me?”

Tears again. “No darling, of course not. None of us are angry with you. We are just worried.”

“I know that sweetie. I know that. Here, scoot over.”

I move over to let her lie beside me. She puts her arm around me and I rest my head on her shoulder. I feel calmer now. Better.

* Brave would be my word of the year if I had one.

** The hardest thing about this story was drawing on my own experiences as a teenage anorexic but NOT make the story about me. Another writing friend said she’d had a similar experience with her first novel… she said it was something that should remain in a drawer and never see the light of day. And though I’ve since thought of ways to improve this very rough first draft, I’m fairly certain it should also stay hidden away.