I’ve talked before about a few of my recurring dreams. There’s the one in which I miss my bus or train (its meaning I suspect is kinda obvious… missing THE boat – derr!). And two oldies – the clichéd disintegrating / falling out teeth; and the (slightly weirder) one involving huge contact lenses that won’t fit in my eyes.

Like I said… the meaning of some are probably pretty obvious while others a bit more obscure or metaphorical. And although I’m a lover of logic I actually believe it makes sense that we dream about stuff worrying us in our waking lives; things we may not even be conscious are plaguing us.

Another dream I have less regularly, but I had not had for many many years, came up at a session I had with a therapist I was seeing last year. I’d had the dream the previous night, so it was playing on my mind. It’s not one that usually worries me; but does, however, intrigue me and – although I worry it reflects badly on me / makes me look needy (or more f*cked in the head than already obvious) – I wanted to share it to know if anyone else experiences the same thing.

I never remember the detail (so perhaps enter the dream part-way through as suggested in the movie Inception) but it usually culminates with me getting imprisoned or arrested. For something bad. Something I’ve done. Murder seems most likely. (Though I’ve got no one particular in mind 🙂 ) 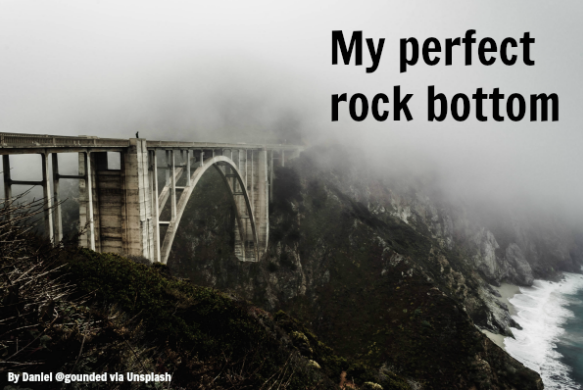 The weirdest thing about this dream though isn’t just that I’ve done something really really bad. Ironic because the ‘awake’ me is ridiculously law-abiding – mainly (I suspect) cos my fear of getting caught is greater than my fear of getting away with something…

Obviously in these dreams, the imprisonment / arrest or whatever are shocking. Devastating. However like I said…

The thing I most remember about these dreams is the sense of relief that comes with it.

It’s like… “I’ve finally hit rock-bottom, things can’t get worse.” Or “I can’t disappoint anyone else from here. This is as bad as it gets.”

There’s a strong sense of freedom or release. The fear of failure, of letting others down, of disappointing those around me disappears. Like I said, the relief is palpable.

I’ve thought about this a lot. (In many ways therapy is kinda wasted on me as I’ve analysed everything from every angle anyway.) I wonder if its meaning is as obvious as: I really do fear disappointing those around me and it’s a relief (and release) when it finally happens? Or is it more that there’s some latent evil desire lurking within and I just want to rebel. To let it out. Perhaps ‘the perfect rock bottom’ isn’t the point, perhaps it’s the murderous act I commit to get there.

Although I’ve done little of it lately, one of the things I like most about blogging is being able to share this crap and find that others COMPLETELY understand. The number of other people who have similar thoughts, hopes and fears is reassuring.

I must admit however, I’m yet to meet anyone else who has the giant contact lens dream!

Can anyone relate to this one? Any thoughts?

* Post named after the lyrics in Pink’s Beautiful Trauma song…