The title is meant to be a play on ‘my day on a plate’ but meh. The last few weeks have had their fair share of ups and downs. I realise I have much to be grateful for and – compared to most – little to complain about. Nonetheless, hang onto your seat as I’m going to have a little whinge.

Initially I was fairly zen about it, but as I’m hosting Christmas… a working oven is generally a requirement. I’d done some detailed research into the problem (ie. googled it) and it seemed the issue was not fixable. I have a gas cooktop I don’t use so decided I’d replace it at the same time as the oven. And having just been able to use a saucepan for the first time in years this past weekend, the decision was inspired!

However… not only did replacing the cooktop add to the cost of pick-up and installation, but it required an extra electrical circuit to be installed and several hours work. Then it didn’t fit into the kitchen bench so we made an urgent call to someone to cut the stone counter. Added to that, the electricians discovered all of the screws in my house switchboard have corroded. So that all needs replacing. They’ve done a temporary fix but due to come back this week to give me the opportunity to spend more of my money on boring (but necessary) stuff.

My internet blew up

We had some storms lately. I was out in one last Monday morning and got home to discover my internet was down. That was fine… I assumed repairs were underway somewhere, though I did have an assignment due the next day and a significant amount of work still to do. (I’d had some trouble getting interviews so was still chasing up two interviewees at the time.)

Several hours later my internet provider advised the outage wasn’t theirs and they’d have to schedule a visit from the telco later that week. Sadly my phone’s hotspot isn’t a backup option at my place as we don’t get  any / good reception, which also meant I couldn’t make the calls I needed to finish my interviews.

I was slightly stressed but in problem-solving-mode so headed into the town’s library to work from there. 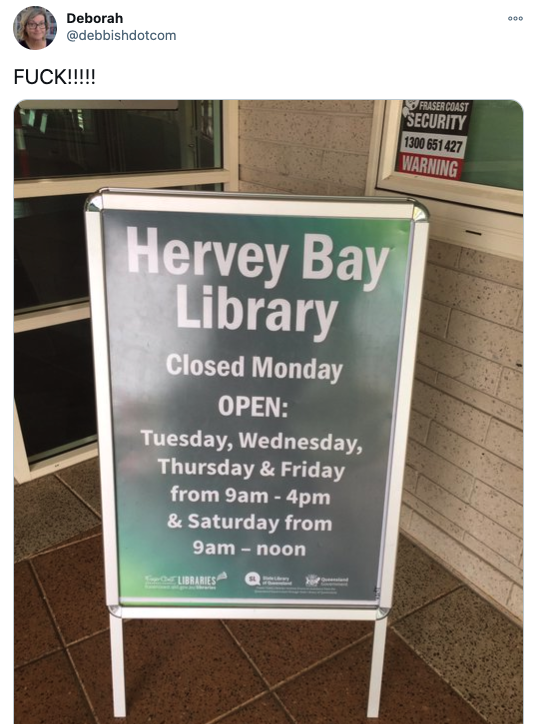 I *possibly* lost it at this point. However, I conducted an interview from my car in the library carpark (where my phone worked). I then headed to my mother’s where I camped out for two days to get my assignment done and submitted.

The lecturer would have given me an extension she said, but I’d already gotten an extra week after rejoining the class two weeks’ late and figured in real life, we don’t get free-passes so I needed to work out how to get shit done.

People letting you down

I’m hosting Christmas for relatives though won’t actually have anyone staying. There are things I’ve meant to do for ages (like clean my decks and patio and get into the corners of rooms and scoop up dead insects or ants and clean my windows and glass doors). So I scheduled in someone to pressure-clean the decks and a house cleaner. And locked in the guy who does my lawn.

And that’s when the fun started. Though the mowing guy gave me two specific days (two weeks after I made contact), he then said he hadn’t and he’d come ‘some time’ before Christmas. Thankfully he’s now been.

I messaged the person coming to clean my house on the weekend to confirm a time for Tuesday (ie. tomorrow). She’s messaged today (Monday) to say maybe she won’t be able to come because a real estate agent she works for wants her to do a job. WTAF? I’ve moved sofas and beds away from walls, lifted rugs. She’s not responded to my message suggesting I need to know asap if she’s coming. Stay tuned for my head to possibly explode.

I should admit I’m conscious my problems pale in comparison to others’. And at least here in Queensland we’re not in lockdown at all and get to spend the festive season with friends and family. But still…  sometimes I wonder why NOTHING is easy.

How are things with you?