In last week’s #MyFirst blogging challenge set by Kerri Sackville, we were given the topic ‘My First Bestie’. I wrote about my neighbour and childhood best friend (Miss M); and I’m sure she’ll be stoked to know she features in this week’s challenge as well – because Kerri has set us the topic of ‘ My first wish fulfilled’.

Like most besties Miss M and I shared many a rite-of-passage. I still recall learning about ‘how babies were made’ and receiving a very graphic book (aimed at children… see pics below!) from my mother which naturally had to be shared with Miss M after I’d finished with it. (I’m pretty sure our mothers had discussed the subject first and decided the time was right.)

Similarly one day in late primary school Miss M told me she’d heard girls talking about ‘periods’ and didn’t think they meant school periods. Did I know anything, she asked. Of course I didn’t but after consulting with my mother we were simultaneously brought up to speed. (I’m pretty sure there was a book involved there as well – but it was nowhere near as memorable!).

And… to this day I still remember receiving confirmation that Santa Claus (along with his counterparts: the Easter Bunny and Tooth Fairy!) was not real. (Oops sorry, forgot to add #SPOILERALERT!)

Miss M discovered her mother’s hiding spot for presents at quite a young age, so in late 1974 (I think*) at age 7, her exploration uncovered a much-desired ‘Velvet’ doll on the top of the cupboard. Not long later ‘Santa’ brought her one for Christmas and – just like that – his cover was blown. 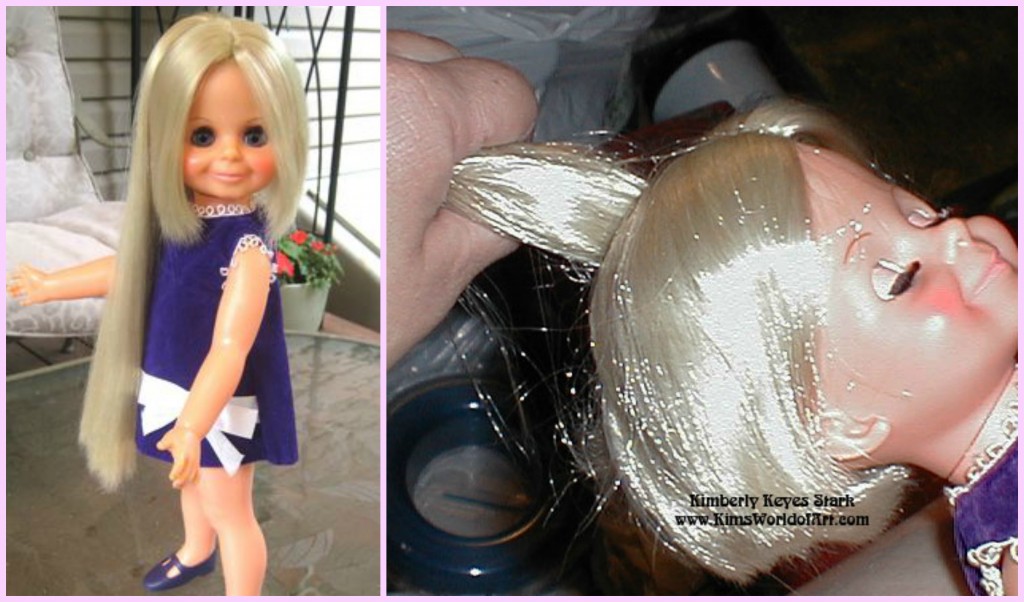 My pouting continued over the Christmas period and I still remember my disappointment days later on my birthday when there was no Velvet doll lurking beneath the bright birthday paper. Indeed, I think I was such an ungrateful little wench that I sulked that the ‘Kodak’ labelled gift was a little transistor radio not even a camera as I’d first thought!

I should note here, my family was ‘comfortable’ but not well off; but I guess I didn’t understand that as a kid. I like to think (now) that I was vaguely appreciative of whatever I received, but sadly suspect I wasn’t.

We were holidaying at an aunt’s in Brisbane at the time and what I do remember is that… in the post-Christmas sales we went shopping and… I FINALLY got my hair-growing doll: an auburn-haired Crissy! I’m fairly sure I would have preferred Velvet – a blonde like myself – but hope I was so excited at my parents’ generosity that I accepted Miss Crissy with open arms.

I should mention I actually wasn’t much of a ‘doll’ person. Indeed I had few ‘dolls’. I was more of a ‘Barbie doll’ girl. I LOVED my Barbies and they occupied my time, rather than their larger counterparts. I think my niece was a bit the same, so perhaps it’s not uncommon. Of course it meant that my Crissy doll survived my childhood and now lives in a suitcase in my mother’s closet… not too worse for wear.

Were you an ungrateful child like moi?
Did you yearn for presents you didn’t receive?


* After some ‘research’ I discovered that Crissy dolls were actually released in the late 1960s. My incarnation (as well as the extendable hair, she spoke – sharing exciting phrases about her love to dress-up) was created in 1974 and sold through to 1975. Her ‘cousin’ Velvet ‘arrived’ in the early 70s and was made until 1974.

PS. Was gonna add a graphic pic warning re the How a Baby is Made book, but figured if it’s meant for children anyone who comes across it should be old enough to deal with the oh-so-attractive image that is still in my head nearly 40yrs later!