Thankfully nepotism was alive and well in 1983 after I turned 15 and was looking for my first part-time job. I was younger than most of my school friends (with a late December birthday) so many were already making the big bucks by the time I decided I needed my own cold hard cash.

A family friend worked at the local Chandlers (a once well-known Australian music, electronics chain-store) and offered me the chance to work at the video counter…. dealing with these newfangled things called VHS and Beta video cassettes… just recently available for rent.

The gig only involved Saturday mornings – unlike some of my friends who also worked Thursday nights – and at $3-something an hour I made around $12 each week.

Fortunately my parents paid my basketball game fees (as I played several times a week) and I was able to bank the $12 to save it for clothes. I should note most of these came from the local Sussans or an annual splurge at Cherry Lane or Sportsgirl when in Brisbane.

Working at the video counter was a no-brainer for me as I loved movies and television. Of course TV on video (DVD) was a loooong way off, but mostly I remember movies of that era – The Postman Always Rings Twice; The Eyes of Laura Mars; and The Deer Hunter. I’d not seen any of them, but they’re etched into my brain.

The empty cases were on the shelves and my arduous task involved finding the video in the drawers behind the counter, inserting it into the case, taking the money and ringing it up on the cash register. I should mention that I also worked on the record and cassette counter on occasions, which was okay, but hated it when someone approached me to ask about a toaster or vacuum cleaners. I mean, WTF would a 15yr old girl know about toasters?! 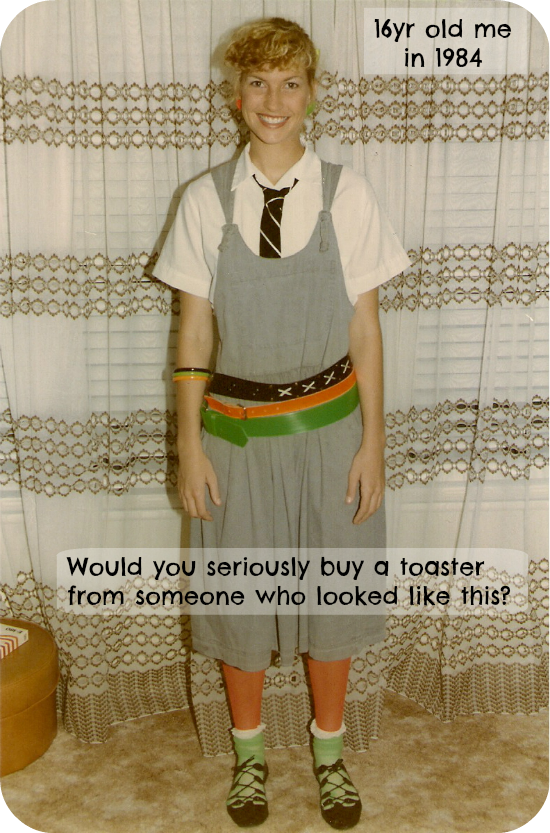 A side benefit of the gig was the fact I was allowed to take videos home for free… but obviously only if they weren’t taken by someone else and – though I was actually a pretty good kid – I *may* have once or twice hidden a recent return so it remained available for me to take home at the end of my shift. (Although if someone asked after it I would give it to them!)

I remained at Chandler’s until I turned 17 and went away to University and I have to say, in retrospect it was a good experience… not just having my own money and having to budget; but also being in a workplace with other adults and dealing with them as customers on a regular basis. It was good for my confidence. Although I did learn little about toasters.

Did you have a part-time job when young? Is it something you encouraged (or will encourage) in your kids?

I’m linking up with Denyse Whelan again, who’s challenged us today to talk about our first paid job!