This week Kerri’s topic is a bit of a mouthful… #MyFirst agonising loss of a material possession.

I’m sure as a youngster I lost things I treasured but I really can’t remember having lost anything major until I was about 23 years old.

For my 21st birthday I’d bought myself a bracelet. It was hugely extravagant and my parents were quite shocked as they never spent money frivolously. They did – however – contribute towards it as my 21st birthday present which gave it great sentimental value. As well as being pretty! 😉 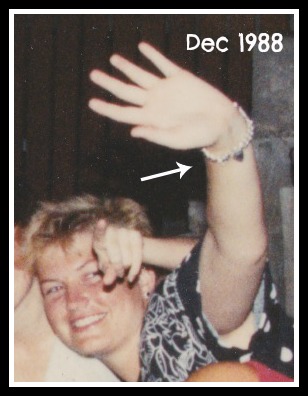 My 21st birthday. And yes, I was possibly drunk.

It was silver and chunky. I don’t ‘do’ delicate jewellery. Indeed I still remember trying to explain to a jewellery maker in Cambodia why HER thick gold necklaces weren’t quite what I was after. Incidentally I got some fabulous deals there, but that’s another story.

I loved my $550 bracelet and lived in it. It was hugely heavy however and IF the clasp came undone, the thin safety chain was of no use as the weight of the bracelet broke it easily. As it was I’d had to have the safety chain fixed a number of times.

I’d had the bracelet a couple of years when I moved to the far north of the state for work. It was still my most prized possession and it only came off a few times a week for my basketball and netball games and training sessions. Several months after my arrival however, I injured my ankle at basketball and was on crutches for a while. I can’t recall how long it took to heal, but lived alone so it was a struggle. I lived in a two-level apartment and recall hopping ‘up’ the stairs but having to slither down on my butt!

Anyhoo, around this time the safety chain on my bracelet broke. Being incapacitated meant I couldn’t get it fixed straight away… and next thing I knew, the bracelet itself was nowhere to be found. 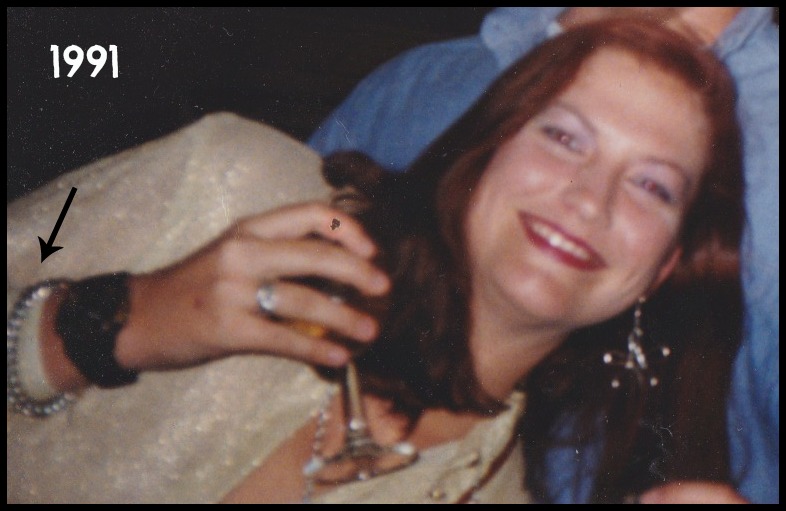 I was devastated when I realised and remained in denial for some time. But I just assumed I’d find it. SOMEWHERE.

It seemed impossible that it could have ‘disappeared’. I mentally tried to retrace my movements over the days before I noticed, but couldn’t pinpoint when I’d taken it off. I could only assume it’d dropped off somewhere and someone else ‘claimed’ it or… who knows… perhaps it disappeared into some rubbish dump or something. I did phone the local police and council in case it was handed in, but it wasn’t.

The thing I remember most was how much I berated myself for its loss. I took it very personally(?!) and felt incredibly irresponsible and most definitely at fault. If it was anyone else I’d reassure them on that point, but… as we all know, we’re never as kind to ourselves.

I later lost a far more valuable bracelet (I’d had made in Cambodia which featured 15 or 16 green sapphires), but by then I’d learnt my lesson and it was insured so I could claim for ‘loss’ as well as theft. Of course it was hand-made for me and therefore irreplaceable, which was kinda sad.

Have you lost something of great value to you?
Do you berate yourself when something goes wrong which you ‘could’ have prevented?