Once upon a time there was a bright yellow Gemini with a black interior – aptly named Bevan. My brother and I shared a car during the year or two we were at University in Brisbane together but when he left the car went to Sydney with him. My not-wealthy but loving parents proffered Bevan as a replacement, which I gratefully accepted. 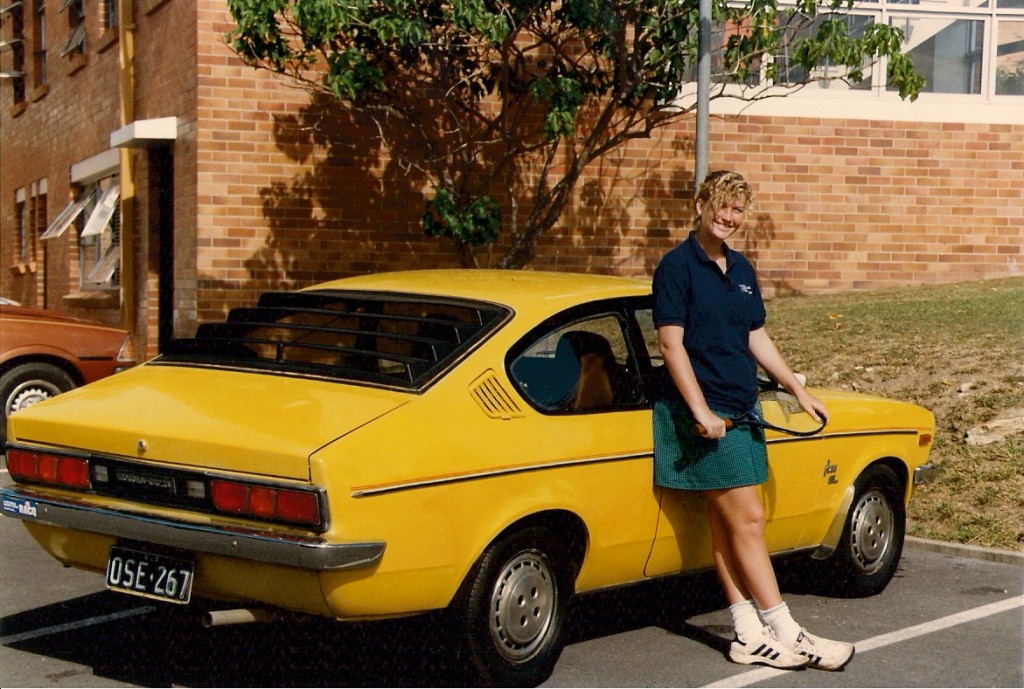 It wasn’t long after Bevan came into my life however, that we had an (ummmm) altercation in a local car park.

I’d been doing some grocery shopping (probably stocking up on diet coke which I drank by the litre even back in 1987) when I reversed out of my car park straight into someone (parked behind me) also reversing out at a similar time. Obviously neither of us saw the other.

As the incident was a long time ago my memories are a bit murky. However… what I do recall is that the male driver was VERY attractive; a bit older than me but gorgeous (probably only late 20s and I would have been 18-19yrs old) with a luxury car, like a BMW or Mercedes. And (for reasons I cannot remember) I seemed to think the bingle was my fault.

Bevan escaped the incident unscathed, but the cute guy’s car had a small dent (and possibly bore some bright yellow paint as a bonus). I was mortified, which I’m sure was obvious, and possibly almost in tears.

I was wearing my residential college basketball shirt (as per the pic above) so – if there was any doubt I was a Uni student, that would have sealed it. Fortunately I could sense he felt sorry for me and after a brief discussion he told me not to worry about it and left.

Of course if I could go back in time I would make some feeble attempt to get his number or at least milked the ‘poor sweet Uni student’ thing a little more.* But at the time all I could think was how much his repairs might cost my parents and what it would do to my insurance.

Fortunately however, it was as if the entire thing never happened: the accident that wasn’t.

Do you remember your first car accident?
Would you have flirted?

I’m linking up with Kerri Sackville again today for her #MyFirst blogging challenge.

* Actually, no I wouldn’t have as I wasn’t the flirty type… #alas