Last weekend I attended the funeral of a friend’s father. My brother has been best friends with *N* since their high school days over 33 years ago. (Actually my own memories of their early exploits are quite murky but exploding bottles of home-brewed ginger beer come to mind! Later of course, came college parties, Bruce Springsteen, wives and kids.)

We’ve known N’s family for a long time and he and his wife have been wonderful to my entire family over the years. Indeed in many ways N’s a bit like a second big brother – often providing me with advice and handy hints – mostly via FB nowadays.

I would have attended the funeral anyway, but as my brother is overseas and mother away cat-sitting (for my brother and his family) I went alone.

The service was packed with family and friends – a fitting honour for someone who obviously touched the lives of many.

Tributes provided by N and his extended family were entertaining, funny and poignant – as the celebration of someone’s life should be.

I was most touched however when N’s sister decided to speak. Even now it’s hard not to cry when I think of her impassioned words.

She spoke of her father’s hands. Of how well she’d known them. Of how they gave such magnificent hugs and the fact they were capable of magic. Her father was an excellent musician and later an avid gardener – despite debilitating arthritis. She couldn’t stop thinking about those hands, she said. And the fact that they’d never hold her again.

I’m overly-emotional at the best of times but I have to admit I completely lost it at that point.

Just a week or so before, you see, I told my mother I often found myself both shocked and upset when I caught sight of my arms. Because they’re my father’s arms. It’d never occurred to me before. Obviously I’ve inherited my fair share of his genes and my mother tells me I’m like dad and his mother. I guess he and I have (had) similar colouring; so my ageing, blotchy and pale-but-freckled arms are his mottled sun-drenched arms.

It breaks my heart when I catch a glimpse unawares. “He’s back,” I think. But of course he isn’t. Not really.

But… I try to remind myself that though these memories break our hearts they also allow our loved ones to live on within them. 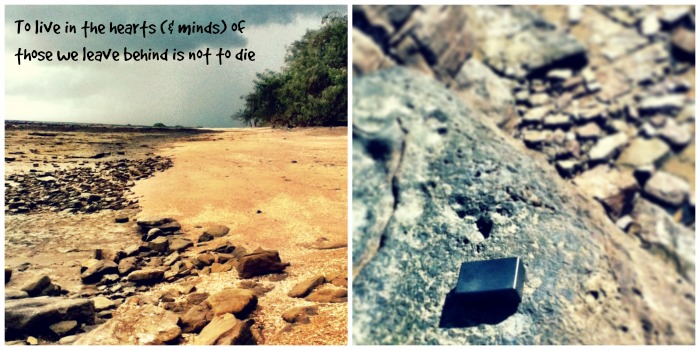 Are you sometimes surprised to look in the mirror and see your mother’s nose or grandfather’s eyes?

Linking up With Some Grace today.