I shared this link from BuzzFeed on Facebook the other day: 10 things to say in meetings to sound more intelligent.

The pics (and probably the quotes) in question are from a new Aussie TV show called Utopia.

The show’s a spoof centred around a government agency – the Nation Building Authority – an agency charged with well, you know… nation-building. 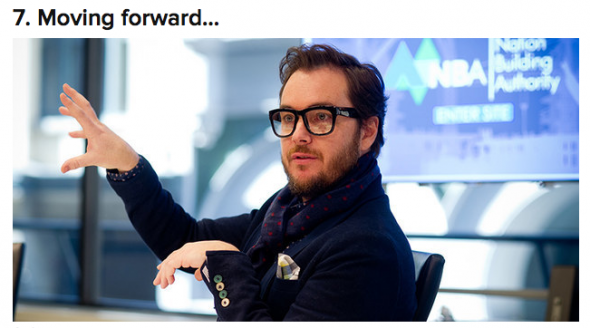 From the BuzzFeed article

Although it’s a couple of years since I’ve worked in government I find it disturbingly realistic: governments keen to win votes or return favours and making ridiculous decisions as a result. (Sound familiar?!)

The show’s the product of the very talented Working Dog Productions who were previously involved with The Hollowmen – another spoof based around policy staff in the Prime Minister’s office.

I still remember the night the first episode of that show aired.

I was working in my own state’s Department of the Premier and Cabinet. That day the Premier had a last-minute meeting with some high profile (and very outspoken and belligerent) sector representatives. So… we had a call from the Premier’s office who wanted us to find ‘something’ the Premier could announce – following their meeting.

As a result I spent HOURS ringing around a couple of agencies for potential options. Of course we had some really good and useful recommendations – developed as a result of extensive consultations. But they weren’t quick fixes. And they weren’t sexy. They were merely practical.

As a result some half-arsed announcement was made (and band-aid solution commenced)*. It was an exhausting day and I can’t recall the detail but assume I eventually got home, had a calming wine or three and scoffed some dinner. And turned on the television.

The first episode of The Hollowmen which aired focussed on the PM wanting to make a ‘policy’ announcement – and everyone rushing around to find a suitably exciting and sexy option.

And now we have Utopia. I expect to some it seems ridiculous. I WANT to believe it’s completely over-the-top. However… I suspect many in government and other large organisations can relate. In fact, on seeing the BuzzFeed article the other day I was reminded of the Bureaucratic Buzzwords Bingo I had pinned to my cubical wall (back in the day). 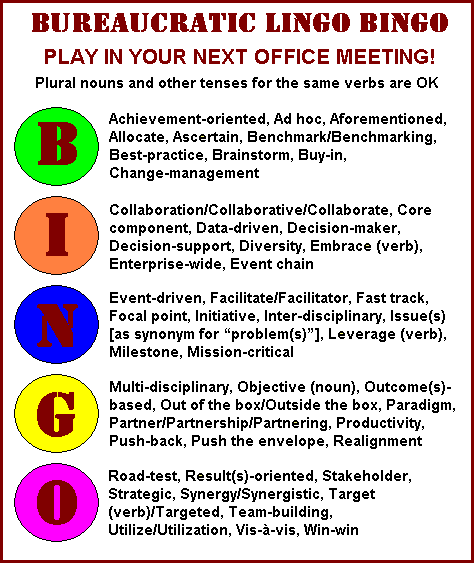 Having said all of that and poking fun… I really have to confess I’m fairly sure a lot of my briefing notes and speaking points included MANY of these. What can I say?! I’m a bureaucrat at heart!

Are you a user of bureaucratic speak?
Moving forward… what phrase do you want to see gone forever?

Linking up for IBOT with Essentially Jess today.

* PS. I should actually mention, as a long-term public servant I ‘get’ the need to placate the squeaky wheel and desire for short-term fixes.