I was struck today by my own mortality. Well, kinda. It wasn’t as if I became ill or my life was threatened in any way.

We had a labour day public holiday in my state in Australia. I think it’s also called May Day. And I was reminded of being in Lisbon (Portugal), during May Day marches in 1995. I’d only recently arrived so still familiarising myself with the city, where I stayed for almost two months to study Portuguese.

Because I was bored and too lazy to do anything on my to-do list today I went through my old photographs until I found one of me in Lisbon. I have very few photographs of myself from the time as it was back in the dark ages. When one had to use a camera, take the film in to be developed and collect the photographs later. It meant photos came at a premium and I’m not sure anyone would have thought to try to stick their arm out with the camera extended to take a selfie. When travelling you had to rely on the kindness of strangers to take the pic and NOT steal your camera.

Fortunately for me I met some other students at the Portuguese language school so do have a couple of photographs of myself, including this one at a Danish student’s apartment in Lisbon. 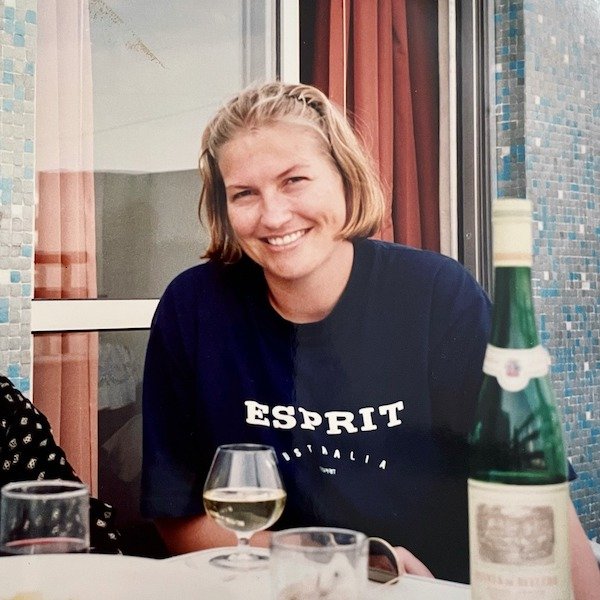 I commented in my Instagram post (and my [Twitter] tweet and Facebook personal page post!) that it was my first time out of the country. Indeed, I’d only been interstate on a couple of occasions and only once by plane. So the trek to Lisbon to study Portuguese and then to Mozambique in Africa was… muito interessante.

Awwww… and that was fine until I occurred to me I was 27 years old at the time.

EXACTLY HALF THE AGE I AM NOW.

And shit. That seemed kinda surreal. I mean, assuming I live past 55 it won’t be the halfway point of my life but it means that everything I did ‘before’ (the me I am in that photo) was the first half of the life I’ve lived (so far) and everything ‘after’ is the second half.

And as everyone knows, time is a mischievous bugger. It’s deceptive. We all know and love the meme that reminds us that 30 years ago was NOT in fact the 1970s, but the 1990s!

Perhaps, like many others I’m perpetually stuck in the early 2000s? Like some weird Y2K glitch that stopped me from realising time was flying by.

For example, it’s therefore 20 years ago that I returned to ‘live’ in Australia (permanently) and… it’s apparently 10 years in October this year since I undertook my seachange.

Where has the time gone? What have I done? There are decades in which I accomplished amazing things, and others in which I seemed static. Is that normal I wonder?

More importantly, how do I WANT to look back on it?