When I first arrived in Mozambique in early 1995 my Portuguese was pretty limited. I’m a bit of a stickler for pronunciation so I SOUNDED okay, but understood little. And because I was shy, embarrassed and deep in cultural shock, when I first arrived I rarely admitted that I had absolutely no idea what was going on around me.

The boss (and person who was supposed to be my counterpart but who foisted me off onto someone else) was the only employee who spoke any English and she was actually at University lectures for 4-5 hours of every 5-6 hour work day. Plus, well you may remember she was pissed at me for not renting her house, so made my life as difficult as possible.

As a result, in the early days I mostly sat around the office nodding and smiling at people around me.

Not long after my arrival our organisation (a women’s non-government organisation) hosted a fund-raising show/display. My counterpart-by-default (Francelina) and I met a heap of women and browsed through their wares. It was not-at-all very African; rather very influenced by the years of Portuguese occupation. On top of that it was SO not my kind of thing. There were crocheted blankets and rugs, table runners, doily things and the like. Francelina held up various items explaining the work that went into each of them and I nodded as if I had some vague idea what she was saying.

Eventually it was over and we were back in the office. The boss, having returned from her time at University asked how it went and Francelina filled her in. I gather. However, next thing I know the boss is congratulating me on my purchase of a crocheted blanket.

What. The. Fuck?! I obviously did not say, but thought.

She laughed at my surprise (did I mention she was a bitch?). Apparently in the midst of my nodding and agreeing with whatever Francelina was telling me I bought a USD100 cream-coloured crocheted rug thing.

Holy shit! I was sent into a tailspin because I felt duped. I felt like I’d been HAD in a big way. I eventually handed over the money (what was for me a few weeks salary – and probably more than a year’s salary to anyone local).

The rug/blanket itself tainted by my own stupidity was relegated to the bottom of a suitcase, where it mostly remained until a year or so ago.

It’s still not my thing. But… I have been using it on my sofa at night. I love having my verandah doors open so the sea breeze can flow into my apartment and I can hear the waves crashing to shore; but as it’s winter I’ve had my blanket on hand to keep me warm. 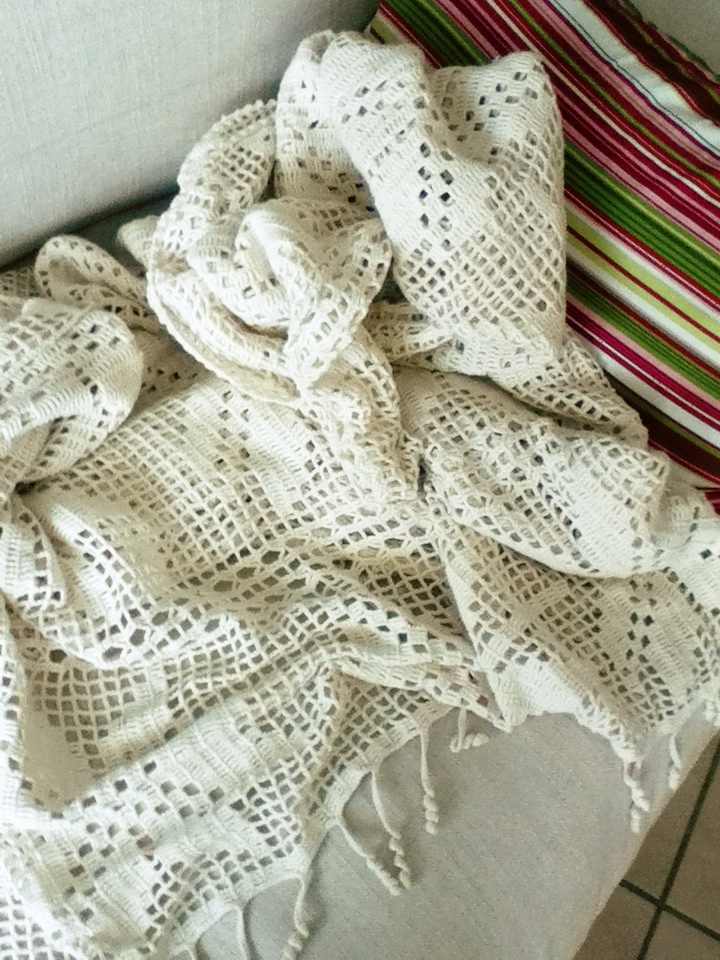 I must admit though that in my efforts to ‘brighten’ my life (literally and figuratively) the colour is very drab and made worse by the dullness of my sofa.

In fact, while hospital visiting recently I saw a 90 something year old woman with one of those bright crocheted blankets and developed blanket envy. My mother almost gagged when I told her I wanted to find one. It’s the sort of thing I would have run away from in the past. But seriously, I can see it on my sofa now – it’d clash with my other bright colours, but it’d be perfect!

I am not sure I want to visit second hand or op shops, so perhaps I need to stake out craft shows and the like.

Any hints?
Anyone want to buy a crocheted rug? Imported from Africa? Going cheap for USD200? Joking…. of course *ahem*.
As a complete aside – do you call them blankets or rugs?

I am – of course – exaggerating (a little) in the title. But, at the time it FELT like it cost a million dollars!