I know I’ve moaned in the past about those who go on and on about some issue or life crisis. Those who can’t get past it and lets it define them. I’ve certainly been like that about a few things in my life, including my eating disorder.

I saw my father – for some years after his heart transplant – allowing it to become ‘who’ he was (ie. man who’d had a heart transplant)… in some ways, his previous 60 years on earth disregarded because of this life-altering event.

Having said that, I also applaud those who talk about things others don’t. I pretty much lay myself bare here but there are a few things I don’t discuss. I hope one day I will and can but at the moment…. not so much.

I glibly talk about ‘feeling depressed or anxious’ and it’s probably evident from my posts and social media feeds that I’m prone to one or both. And I think mental health certainly should be something we discuss more without a sense of shame or weakness. (And we don’t consider those who do ‘brave’ because it should be commonplace.)

I was pondering on this today when I came across a twitter thread by Sam Missingham. I think – I appreciate this sort of honesty even more because it sometimes comes out of the blue and captures onlookers unawares. 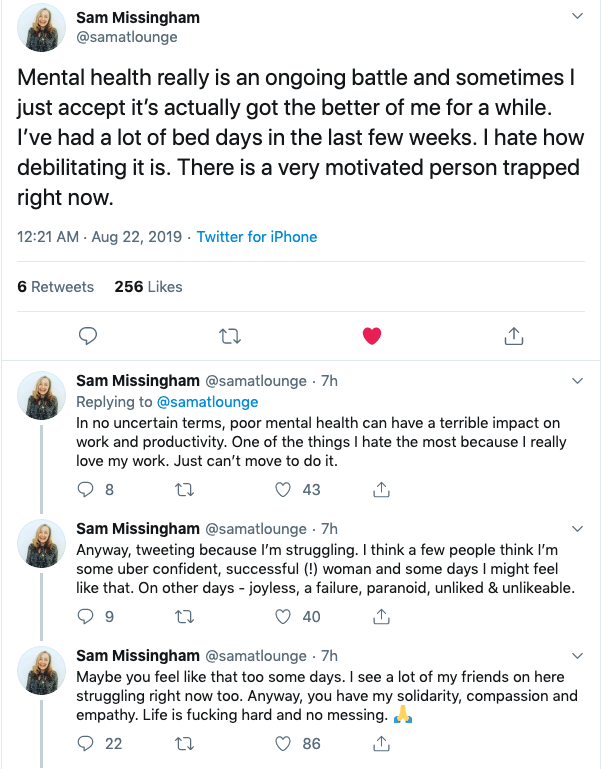 There’s a saying I’ve seen attributed to many MANY different people but goes something like…. ‘You never know what someone else is going through, so just be kind.’

Happy Thursday! (Linking up with the LovinLife gang.)