The last few days have been interesting ones, and have brought back A LOT of memories. I hadn’t set foot in a hospital since my father’s six-week stay last year, which culminated in his passing; and the sense of deja-vu has been quite scary.

My mother travelled to Brisbane (where I live) from her regional Queensland town last week for surgery. The operation she required wasn’t a big deal, but involves a 5 day hospital stay and she will need to take it easy for a while.

The memories started just before she arrived in town. I’d been sick, just with cold and flu type symptoms so was already feeling a bit tired and emotional which has probably contributed to my angsty-ness.

Firstly I started worrying about not seeing her before her operation IN CASE something happened. Naturally then I went to that bad place of ‘what if?’ Since my dad’s death she’s really all I have, given my lack of partner and family of my own. (Naturally I was making it ‘all about me’!!!)

Then I started pondering on dad’s last weeks – his initial admission to hospital for some bowel problem, his subsequent fall in hospital in which he fractured his spine and was unable to move, his bizarre delirium and finally the diagnosis (that aside from everything else) cancer had spread throughout his body. After two weeks in his hometown he was transferred here for a couple of weeks until the final diagnosis (and prognosis) was known after which he went into palliative care for his remaining time.

The hours I spent at the hospital on the day of my mother’s surgery were confronting. The waiting. The uncertainty.

Mum and I joked about it initially: at her pre-op appointment as she pulled out her little bag of medications and compared it to my dad’s. As a heart transplant recipient, my father’s medications had their own condo.

But then it got real. The hospital bed she’s in isn’t as amazing as the one dad had for his spine, but getting instructions on how to work it (along with the pain medication pump, reading light and nurse’s buzzer) was all very deja-vu-ish.

Each time mum raises the back of the bed I’m reminded of dad’s pain as we tried to sit him up enough to eat and the difficulties we had feeding him over those final weeks. The beeping of drips and various other things around the bed are also far too familiar.

Today my mother dozed briefly during my visit. I watched the rise and fall of her chest and remembered my brother, mother and I holding our collective breaths each time my father took one, wondering if it would be his last. 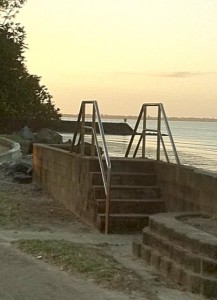 At least the worst is out of the way now. I’ve had my hospital revisiting cherry broken – in a manner of speaking.

It’s just over six months since dad passed and it still doesn’t feel real. Perhaps it never will. The hardest part is to not go ‘there’: to the ‘what ifs’. Mum and I talked about it today. We don’t regret any of the decisions we made about his care… but I said, ‘If I’d known what the last week or two would have been like, I might have cherished the ones before it more.’

But we never know. What’s ahead. If I was a different kind of person I’d comment here about making the most of today. Blah blah blah. But I won’t. I’m not that kind of girl.