About a week ago I wrote about feeling ‘almost’ grown up – as I’d just bought a food processor (albeit a $24 one from Target!). I mentioned that I was trying some new recipes rather than having the same few things night after night. Week after week.

I was using some recipes (like the zucchini pasta) from a recent foray into raw food cooking and I’d found my old Weight Watchers cookbooks. I’ve also been bookmarking recipes I see online and actually trying the bloody things. My first attempt at making something new – the Sour Cream Chicken – was less than stellar. It still tasted nice but didn’t quite look like the picture in the recipe.

I’m pleased to announce that last night I tried ANOTHER new recipe, which I also found online: Loaded chicken and potatoes! 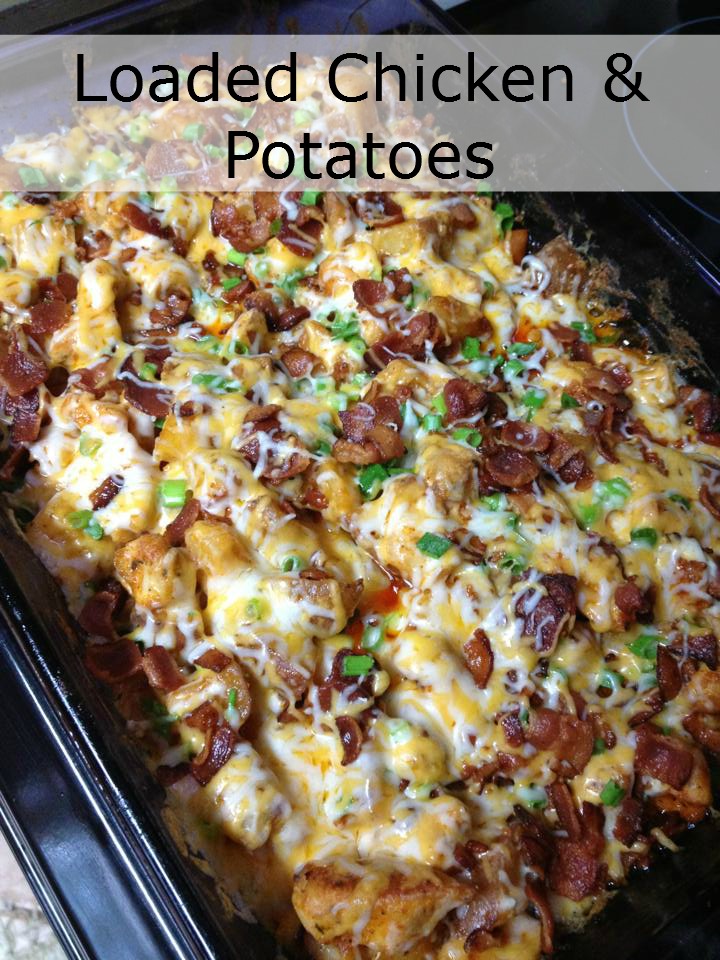 Quite frankly anything involving potatoes excites me as I’m a potato freak. When I lived in Mozambique and Cambodia and could rarely get meat I happily lived on potatoes. Night after night. After night.

My fave part about the loaded chicken and potato recipe is that preparation is minimal. If you’ve clicked on the link above, you’ve seen that you have to just cube chicken breast (if you haven’t bought it pre-cubed – which is the sort of thing I tend to do cos I hate dealing with raw meat!), chop up some potatoes, mix some olive oil with salt, pepper, garlic powder and paprika, stir it all together and shove it in the oven. I even used the casserole dish to mix everything in, so minimised washing up. (As an aside… are you shocked and amazed that I even OWN a casserole dish?!)

After the chicken and potato are cooked through – about an hour (supposedly… but more on that later!) you sprinkle cheese, bacon bits and green onion (shallots I think) on top and bake uncovered for about 5 minutes. And, ta da!

Deviations from the recipe
Of course given my limited expertise in the kitchen and lack of resources, I had no red potatoes. But after checking with my trusty blogging foodie friends – Jo from And Anyways… and Mel from The Cook’s Notebook – I discovered I could continue without. I also had no shallots, so decided to chop a normal brown onion and throw it in with the chicken and potato mixture. (Mel also signed off on this option – #phew!)

I used garlic flakes or granules instead of power. On that issue my care factor was #meh, and I used mozzarella cheese cos I had no idea what fiesta blend cheese was. Plus it was all I had. And finally, I wasn’t exactly sure what ‘hot’ sauce was. Embarrassingly I used gluten-free Worcester Sauce, before realising later it was probably something like tabasco! #oops

I also added some rosemary, but for no other reason than I have some growing. I usually kill plants, but my rosemary (my one and only herb) is thriving and I’d cut some off the night before… so I added it to the mixture before putting it in the oven. #woteva

The hiccups
Rather than taking an hour to cook, my potato remained uncooked until closer to the 2hr mark.

I suspect I either had the potato too big and chicken too small; or red potato cooks more quickly. Next time I’ll make the potato smaller or par-boil / zap the potato in the microwave before putting it in the oven.

I later discovered however – in the original recipe, which I tracked to here – the potatoes are cooked FIRST and the chicken added (along with the cheese mixture) near the end. I’m not sure 15mins would be enough to cook the chicken, but possibly some combination of the two recipes would work! 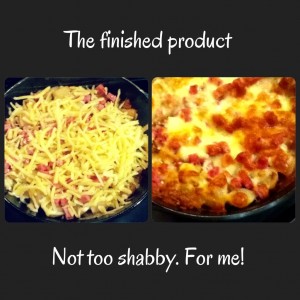 Even though it was almost 10pm when I ate and I’d told myself I was no longer hungry and would just have a sample; I had two helpings (and leftovers for lunch today!).

Just as excitingly, mine actually looked quite good – almost like the picture in the recipe, which shocked even me!

Does Loaded chicken and potatoes appeal to you?
Is Tabasco sauce, ‘hot’ sauce?
WTF is fiesta blend cheese? (Please don’t make me Google it?!)